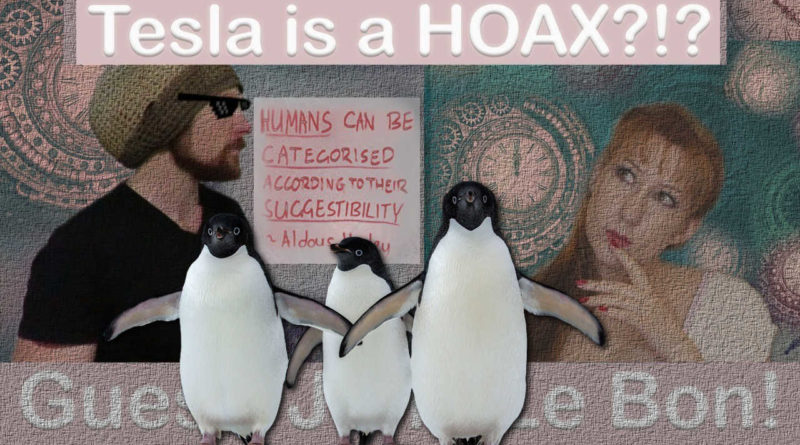 The Tesla Hoax with Orphan Red

A few days ago I was invited by a youtuber who calls herself Orphan Red / Sasha to discuss the Tesla Hoax on her livestream.

It ended up being a six-hour marathon discussion covering all kinds of topics, including:

As well as a fairly detailed analysis of the Tesla hoax, and more.

In a few days I plan to release this as a three or four-part mp3 series.

I’d do it right now but I’m busy working on other material.

For now, here is an unedited mp3 rip of the video: the full six hours in one file.

Stream here (or right-click and ‘save as’ to download the mp3 file).

And you can see the video for yourself here.

^If the 32kbps file is too low-fidelity for your tastes, you can rip the youtube video to your own computer using y2mate or similar youtube download sites.

I’ve got so much I’d like to say about this chat: the topics themselves and the meta-elements of the conversation.

In time I hope to release a Member-only reflection video / audio / article about it.

Apparently the call has the fakeologist tick of approval.

If you give this chat a listen, I’d love to get your thoughts as well.

As I said, in time I will release this call in smaller parts, along with my own reflections.

For now, the tl;dr is this: it has been an epic journey over the past few years, and in this six hour call, I covered a lot of what I’ve learned.

The Mandoozle Effect with Tim Ozman

A few days ago I emailed Tim Ozman aka IPS to discuss the Mandela Effect as part of Mandela Month here at johnlebon.com

Huge thanks to TNG for prompting me to finally email IPS and try to organise this call.

An unedited version of the first part of the call is available publicly in video format here.

I have ripped it to mp3 and you can download that file here.

Stream here (or right-click and ‘save as’ to download the mp3 file).

I exported this one @ 64 kbps to keep the file size low.

I plan to make some minor edits and release a superior mp3 version of Part 1 in the coming days.

IPS has also uploaded Part 1 to his soundcloud, you can listen here.

IPS and I then recorded a Part 2 on the JLB Discord server, which ran for about 100 minutes, and the final edit will come out to close to two hours.

I will have that finished by the end of tomorrow if all goes well.

It will be available to Members of johnlebon.com immediately, and Patrons of IPS a few days later.

Part 2 in particular was an epic chat in so many ways. IPS is seriously tip of the spear at this point in time.

Long story short, instead of the usual ‘wah wah we are being censored for speaking truth’ nonsense we hear from so many people, IPS is using many different platforms to build up an uncensorable network of content/concept sharing delivery systems, and making bank in doing so.^^

^^Relative to most content creators in the media fakery aware segment of the ACT realm.

So long as they allow him to stay he’s even using Patreon.

This guy is doing it all, and he is covering media fakery and related concepts as well as — if not better than — anybody else in the game, past or present.

The best (or most relevant) stuff was all covered in Part 2, but Part 1 (even in its unedited form) is a chat well worth listening to.

As I explained to IPS in the aftercall chat, I never get my hopes up too high with anybody in this scene (outside of my own website), because it is invariably a matter of time until they:

a) Get upset with / make accusations against me, or

b) Burn out and disappear altogether

For the time being, however, I’m geuinely excited about the IPS operation and what I think he is trying to accomplish.

His attitude is the complete opposite of the loser / victim mentality we see so often among prominent voices in this scene, and he is showing everybody that there is a market for this material, we are not really being ‘censored’, and if you do things properly, you can get your ideas out to more than enough people to make it worth your while.

Again I have so much more to say on all of this, stay tuned.