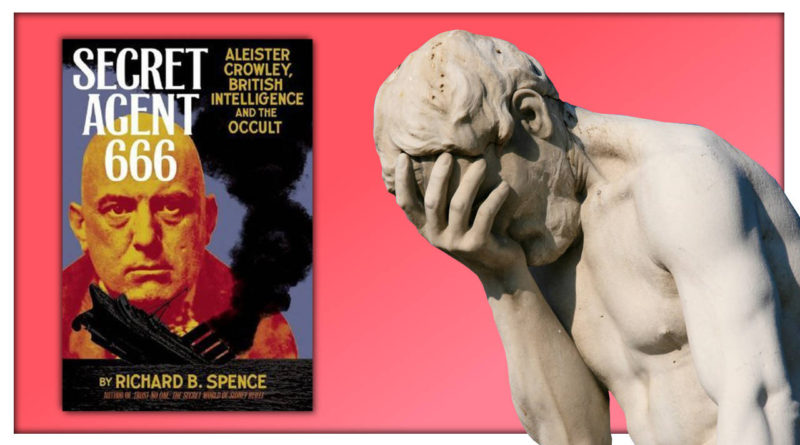 The bulk of this piece has been built upon what was originally a standalone comment, posted to the Warmup Thread of Member Skype Call #21 (which is focused on Aleister Crowley & Magick).

I decided to turn that comment into a post, in order to make it easier to read. Then I added some further material and reformatted the whole thing.

Right now I am trying to piece together the best evidence (if any exists) that Aleister Crowley was a British spy.

This seems to be a popular opinion: Crowley worked for MI5. All I want to know is, what is the best evidence to support this claim?

Here is what I have come up with so far.

The ‘Crowley = Spy’ meme seems to have been chiefly propagated by Richard B Spence, who published a book entitled ‘Secret Agent 666: Aleister Crowley, British Intelligent and the Occult’ in 2008.

Spence is professor of history at the University of Idaho, where he apparently teaches courses about conspiracy and espionage. From his LinkedIn page:

Dr. Richard B. Spence is a Professor of History at the University of Idaho where he has taught since 1986. His specialties include Russian, military, espionage and occult history. One of his most popular courses at UI deals with the role of conspiracies and secret societies in history.

He has been interviewed on Coast to Coast, Midnight in the Desert, The Other Side of Midnight, Truth Be Told, Jay’s Analysis, Leak Project and other programs and has been a commentator/consultant for the History Channel, the International Spy Museum, Radio Liberty, and the Russian Cultural Foundation’s documentary film unit.

Some prime ACT realm interviews in there: Coast to Coast, Jay Dyer, even the History Channel.

People love stories, and this guy has an interesting story to tell: an occult figure who was really a spy!

Speaking of Spence’s interesting stories, what else does this man focus on? According to his University of Idaho bio:

Richard “Rick” Spence is a full professor of History. He specializes in Russian intelligence and military history, and his course offerings include Modern Espionage, Anti-Semitism and the Holocaust, History of Secret Societies and the Occult in History.

This guy specialises in Anti-semitism and the Lolocaust, does he?

Clearly we are dealing with a straight-shooter, a dead-eye dick, a real behemoth of research and critical thought.

Any man who has sat through the painful experience of listening to Irene Zisblatt, and felt the pain of her diamond-studded poopies, knows all too well about the true evils of this world.

Unfortunately I have not been able to track down a pdf copy of Spence’s book, ‘Secret Agent 666’. Perhaps I will find a copy soon.

What I have been able to find is this paper from 2000, which appears to be the genesis of Spence’s book.

It appears as though Spence originally penned a journal article on the topic, which generated so much interest that Spence then parlayed the contents of the piece into a book.

In other words, although this paper is not the same as the book, it is written by the same author, on the same topic.

Perhaps Spence shares some good evidence for his ‘Crowley = spy’ claim in this paper.

The following passage appears early in the piece:

“…newly available evidence from the archives of the United States Army’s Military Intelligence Division (MID) confirms official British knowledge and acceptance of his actions, and specifically identifies him as an employee of His Majesty’s Government.”

So Spence’s evidence comes straight from the military.

The evidence which busts the big secret comes to us from… the guys who are apparently paid to keep secrets.

Sigh. Why do I bother?

Still, it is worth knowing what these military reports supposedly say. Maybe there is something useful or interesting in there.

On page 6 of Spence’s article we are given a quote from an ostensibly official source, stating that Crowley is an ’employee’ of the British government:

A year later Crowley’s name turned up again in the American reports, this time in a general summary of cases from the resident intelligence officer at West Point, New York. Crowley, who had been camping on Esopus Island in the Hudson River as part of a “magikal retreat,” had come to the attention of the office because of his connection to Madeleine George, an actress from New York City suspected of being a German spy. The investigating officer soon discovered that the Beast had already been subjected to an inquiry by the Justice Department because of his work for Viereck. As a result of this, “it was found that the British government was fully aware of the fact that Crowley was connected with this German

No citation given. I can only infer that by ‘American reports’, Spence is referring to the same source as the footnote immediately preceding this section, which is footnote [26], which leads to:

In other words, this section appears to trace its source back to the US military, just as Spence explained earlier in his piece.

Moreover, “It was determined that Aleister Crowley was a employee of the British Government … at present in this country on official business of which the British Counsel (sic) in New York has full cognizance.” The message seemed quite clear: Crowley was “OK’” and Americans should leave him be. The Americans were not entirely satisfied, however; the report concluded that “in view of the information which has been gathered within the past two months it may be possible that Aleister Crowley is double crossing the British Government.’” But there is no explanation of this suspicion. In any case, Crowley was working for the British, and contrary to his later recollections, he had official recognition and support.

Wow, what a knockout punch. Crowley, you’ve been busted!

Spence cites a US military report (ostensibly from 1917) which claims that Crowley may or may not be working for the British government.

This is — apparently — Spence’s best evidence that Crowley was a British spy.

Littered throughout Spence’s article are stories about Crowley meeting this person, or knowing that person, and so on, and so forth. It is implied that, because Crowley met/knew people who were themselves involved in the military and/or government, then he too ‘may have been’ a spy himself.

In terms of actual evidence, however, the passages quoted above appear to be the best Spence has to offer.

Let me make this more clear:

The passage does not say that Crowley is/was a spy. It says he is a government employee (and may or may not be double-crossing the British)

Of course not. This is ridiculous.

Crowley may well have been a spy. I don’t know. But even if he worked for the British government at some point, this does not mean that he was a spy.

People can believe that Crowley was a spy, if they want to. It makes no difference to me.

The significance of this fact goes well beyond the original questions concerning Aleister Crowley.

If one were to merely skim over Spence’s piece, it would be easy to believe that Spence’s research was indeed rigorous and well-sourced. Among the footnotes are to be found references to articles in the New York Times, for example.

One of those references stood out to me, because of the mention of Atlantis. From pages 4-5 of Spence’s article:

Crowley protested the coverage, which he thought made him and his tiny movement look silly. If so, he only added to this perception some days later in a letter to the Times, in which he proclaimed the Irish to be the noble descendants of ancient Egypt and Atlantis [19]

So Crowley allegedly intermingled histories about Egypt with myths about Atlantis. This piqued my interest, so I decided to check footnote 19:

On this page, I found no mention of Crowley, or Atlantis, or Egypt.

There are, in theory, innocent explanations for this.

After all, perhaps I am simply failing to see the mention of Crowley on that page. Perhaps I am not reading it right. Perhaps it is there, and my own eyes are failing me. I am open-minded to this possibility.

Or, perhaps, there is no mention of Crowley on that page, because it is not a true copy of the NYT on that day. Perhaps there is some other website which hosts a different (and accurate) version of NYT, 12-Jul-1915, p.10, and maybe this other version does indeed support Spence’s claims. I am open-minded to this possibility.

I am also open-minded to the possibility that Spence’s reference is complete bullcrap. Who is ever going to check this stuff other than myself?

This is a Joke

Why am I wasting my time with this garbage?

If I did not know better, I might think that this is all one elaborate ruse to test me, to see how long it takes for ‘JLB’ to ‘crack’.

I look around. I listen. I see and hear people proclaiming themselves to be wise. And then I see stuff like this.

What kind of utter retard could be convinced by ‘evidence’ as flimsy as that offered by Spence? How am I the only person on earth today taking the time to inspect this nonsense, and pointing out the lack of evidence to support the claims being made?

For posterity, I will also include the following link to some dude’s blog. It is every bit as laughable as Spence’s paper, and gives an insight into the kind of ‘educated’ mind which can be so easily led into beliefs about the lives of characters like Aleister Crowley.

This kind of rubbish reminds me of how I felt when trying to read Miles Mathis’ papers a few months back. So many words, so little evidence. Story-telling. Flowery language and empty rhetoric, with little regard for primary sources or application of logic. It appeals to people who want to *feel* smart. It does not appeal to people of a truly skeptical bent. Fortunately for the authors of these silly stories, people like myself a few and far between. The rest of the humans are as beholden to stupid stories as crack addicts are to drug dealers. Absolutely hopeless.

Remember that the Member Skype Call #21 ‘Crowley & Magick’ will be taking place this weekend. See my other research into these topics on the relevant Warmup Thread.

Also remember to revisit my own Primary Source Research Methodology piece, which explains the difference between research and ‘research’.

One thought on “Was Aleister Crowley a Spy? ‘Secret Agent 666’ Review”