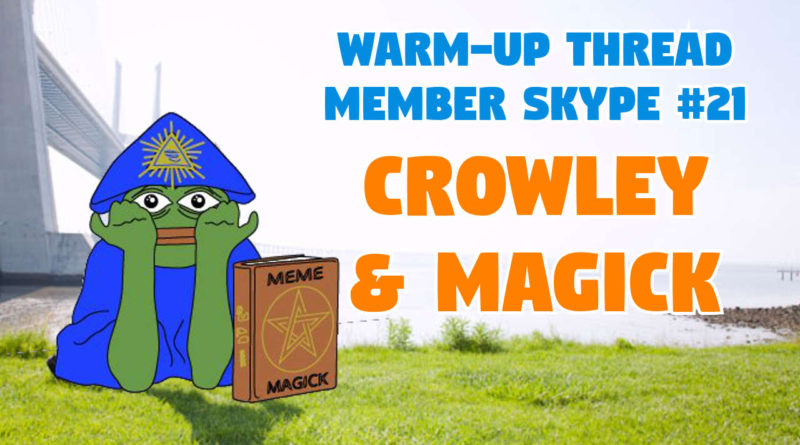 This is the Warmup Thread for Member Skype Call #21, which is focused on Aleister Crowley and Magick.

Recall that in Member Skype Call #20 we discussed the Christopher Nolan film The Prestige (2006), whose themes include magic, deception, showmanship, identity, and consciousness.

It turns out that David Bowie himself has direct ties to ‘magick’, and made numerous references to Aleister Crowley and occult ideas.

Below are some lyrics from Bowie’s ‘Quicksand’, which was purportedly recorded on July 14, 1971.

One of Crowley’s best-known works is 777 and other Qabalistic Writings.

In Magick Without Tears, Crowley describes ‘magick’ as thus:

You can read a slightly more detailed account of the difference between ‘magic’ and ‘magick’ here.

It boils down to this: the distinction between magic and magick is a subjective one: where does mere ‘deception’ end, and ‘real’ change begin?

For the purpose of the upcoming call, it is worth noting that I personally see a significant amount of overlap between ‘magic’ and ‘magick’ (as I intimated during MSC #20). I have not personally performed any rituals or constructed any magical sigils, and do not consider myself a ‘magician’.

I do however acknowledge that I am engaged in a constant process of what might be described fairly as magic or magick, in the sense that I am constantly creating illusions (e.g. producing videos), and attempting to impress my will upon the physical realm with conscious direction (e.g. training my body to become stronger).

Note that Crowley defined all attempts at impressing one’s will upon the physical realm as ‘magick’:

What is a Magical Operation? It may be defined as any event in nature which is brought to pass by Will. We must not exclude potato-growing or banking from our definition. Let us take a very simple example of a Magical Act: that of a man blowing his nose.

Yes, under Crowley’s definition, even growing potatoes or blowing one’s nose is a form of magick.

I don’t pretend to know very much about this character. I have read brief portions of books attributed to him, but that is about it.

My hope is to get better up to speed between now and Sunday.

With that said, there are a few elements of the basic Crowley narrative which strike me as suspicious.

Just read his wiki bio for yourself and you will probably notice some red flags.

Here is one of the major things which stood out to me: The Book of the Law, produced in 1904 and considered the central text of Crowley’s ‘Thelema’, was purportedly written across three days after Crowley had slept in one of the pyramids in Egypt. I would like to know how he allegedly gained access to these pyramids.

Moreover, the ‘Stele of Revealing’ seems like another Pilate Stone to me.

How important is this ‘Stele of Revealing’ to Crowley, Thelema, and ‘magick’ as it is understood today?

The Stele of Revealing is an Egyptian religious artifact dating from the 26th dynasty. It is a wooden tablet overlaid with stucco and painted with mythological scenes and hieroglyphic writing. It was made to commemorate the death of a Theban priest of the god Mentu named Ankh-f-n-khonsu. Although many objects were typically sealed inside the tomb along with the body, funerary steles such as this one were placed outside the tomb as a focal point for offerings given by friends and relatives of the deceased.

The Stele of Revealing is especially sacred to Thelemites because it is through this artifact that the Law of Thelema was revealed to Aleister Crowley in 1904 e.v., inaugurating the New Aeon of Horus. Soon after discovering the Stele in a museum in Cairo, Crowley received the mystical communication known as The Book of the Law. Much of what Crowley discovered in the Stele of Revealing “set the stage” or formed the basis for these channeled verses.

The Stele of Revealing is ‘sacred’ to Thelema, because it ‘set the stage’ for his Book of the Law, which would go on to underpin the broader Thelemic philosophy/framework.

Think about all of the people you have heard speak about ‘magic(k)’, ‘the occult’, ‘esoteric knowledge’, ‘ancient wisdom’, and so on. How many of these people have explained, to their interlocutors and/or listeners, that so much of this line of inquiry traces back to a painted piece of wood ‘discovered’ in the 1850s?

I’m willing to bet that, for many who read this page, it will be a case of: you heard it here first 🙂

Our Nikola Tesla-believing friends have articles about communication with Martians, published in sci-fi magazines circa 1900.

Our Library of Alexandria-believing friends have a discredited book by Edward Gibbons from the 1700s.

Our bible-believing friends have Pontius Pilate and his Pilate Stone ‘discovered’ in the 1960s.

Not to mention the Codex Sinaiticus and Codex Vaticanus, both ‘discovered’ in the mid-1800s.

Our Herodotus-believing friends have the ‘Oxyrhynchus Papyri’ discovered in the late 1800s.

Our heliocentrism-believing friends have the magical weigh-balls in a shed to determine the mass of the moon.

Our evolution-believing friends have their 150-person sample size, computer-based ‘study’ from 1987 to prove that we all come from Africa.

And now we learn that our Crowley-believing friends have a painted piece of wood ‘discovered’ in the 1850s.

It almost seems like every mass-belief story can be unraveled — from the ground up — by anybody willing to check into the underlying evidence and think for him or herself.

In the preceding section I mentioned several of the stories/myths I have spent time scrutinising over the past few years.

You may have noticed that there is an overlap between some of them.

In the case of ‘Ancient Egypt’, I have yet to publish the bulk of the research which has led me to the conclusion that it — ‘Ancient Egypt’ — is a relatively recent fabrication, a key tenet of the broader History Hoax.

The article ‘History of Histories’ does go into some detail about ‘Grenfell and Hunt’ and their ‘Oxyrhynchus Papyri’.

For now is shall suffice to make this point:

If Crowleyan ideas have had any significant impact upon modern (pop) culture, then the ‘Ancient Egypt’ hoax is even more significant than we might have previously recognised.

Thus the question naturally follows: how much of modern culture as we know it has been impressed upon by Crowleyan ideas?

Let’s take a look at just a couple of examples.

Timothy Leary, of course, being the man who helped to propagate the use of LSD and other ‘psychedelics’ in the 1950s and beyond.

Exhibit B: The Beatles

This is only an album cover, and not proof of anything. It might be enough to encourage some to look further, though…

Here is just one page from the book:

The protagonist of V for Vendetta openly states that his anarchist idealism revolves around the Crowleyan maxim Do What Thou Wilt.

And then there is Watchmen (1980s), the book which got me looking further into Alan Moore’s work when I first encountered it last year.

Again, no spoilers, but here is a crucial takeaway from the story:

Ozymandias is one of the primary characters. A good guy or a bad guy? That is the question.

Ozymandias is overtly named after a character of ‘Ancient Egypt’, and styles himself and his surroundings after ‘Ancient Egyptian’ iconography.

This includes his company, a mega-corporation with tentacles in all industries, being named ‘Pyramid’.

The significance of the Ozymandias -> Ancient Egypt connections will be apparent to those who know how Watchmen ends.

Those of you who have read Watchmen (rather than merely seen the film) will be able to connect a few more dots for yourself.

It is all rather overt, once one has developed eyes to see.

In any event, this leads us to a short video of Alan Moore speaking about what magic means to him, which might be a nice way to round out this post.

Those of you who like to ‘read ahead’, as it were, might find yourself truly amazed by some of the ‘coincidences’ to be found in the following: