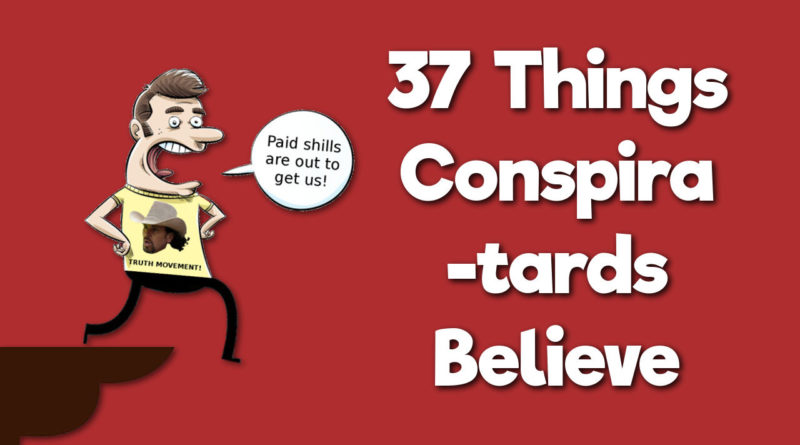 In October of 2016, I published a post entitled 37 Things Normies Believe. 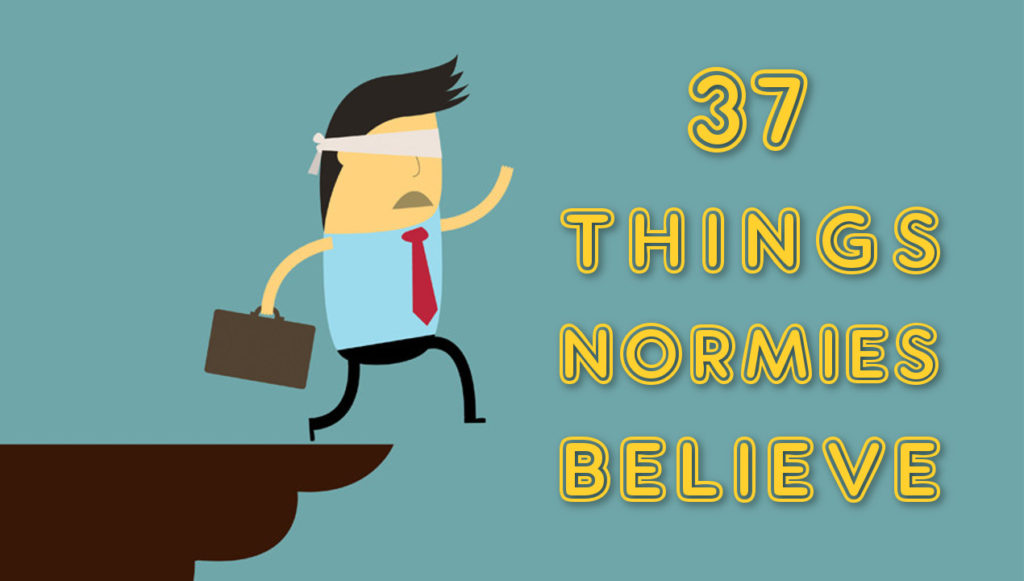 In retrospect we can see that this was one of the key pieces which ultimately set the tone for the direction of this website right through to this day.

Then in June of 2017 I produced a video in which I covered the first ten Things on the list, and explained why I believe every one of them to be a hoax/deception.

Lately, some veteran members of this site — Dante from NY, Chad628 and Nate — have been throwing around a few ideas about what a ’37 Things Conspiratards Believe’ list might look like.

For those new to the site, it is a long-running trope on johnlebon.com that ‘normies’ and ‘conspiratards’ are two sides of the same coin.

This idea was explored in a video released in May of 2017, following the viral success of my Ariana Grande sketch video. 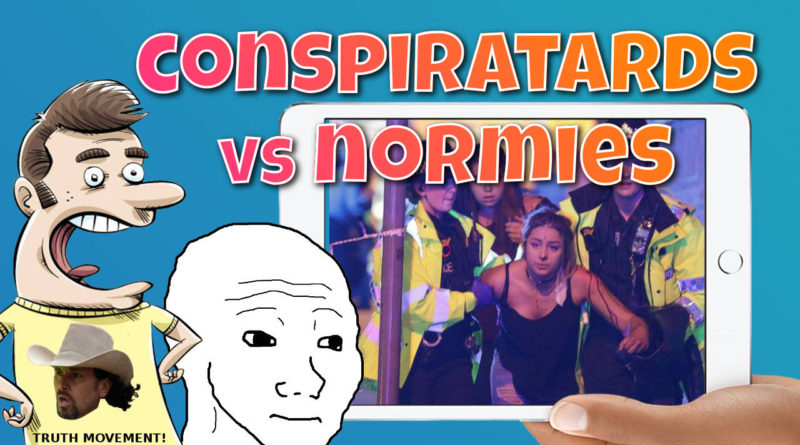 The long story short is this: many ‘awake’ people like to believe that other ‘awake’ people are intelligent and thoughtful, that they are somehow superior to the normies.

The simple (and oftentimes disheartening) reality is that this is simply not the case. The ‘awake’ people are just as lemming-like as their normie brethren.

In fact, when observed and analysed objectively and dispassionately, normies and conspiratards reveal themselves to be amazingly similar in fundamental ways, to the point where a practicing skeptic will have no interest in identifying with either group.

I have created this post to serve as a place for Dante, Chad, Nate, and anybody else who might be interested in doing so, to put forward and discuss suggestions about some of the beliefs which are most popular among the conspiratards.

Some people have in the past objected to the use (by myself and others) of terms like ‘normie’ and ‘conspiratard’. If you watch the ‘Conspiratards vs Normies’ video mentioned above, it will probably go some way to explaining why I personally believe that these terms are useful and appropriate when used in context.

You can get a better idea of why certain terms (e.g. ‘normie’) are used on this site, and what they are taken to mean, on the JLB Lingo page.

With that said, the comment section of this post will also serve as a place to discuss the merits of the terminology in question. I am nothing if not open to constructive criticism and alternative opinions and ideas, so if you would like to critique the normie/conspiratard terminology question on a meta-level, this is the place to do so 🙂

This post will be publicly available unless you, the Members of johnlebon.com, vote to make it otherwise.

Finally I will end this post by adding my appreciation for this idea. Top work, Dante, and also Chad and Nate and for building upon it so quickly — ‘like a bat out of hell’, as they say.

Below are the initial comments from Dante, Chad and Nate, left on 37 Things Normies Believe.

I have added the numbers myself for illustrative purposes.

Note that the list does not have to be limited to 37.

Consider this post and the reply suggestions to be the initial shortlist.

not well fleshed out, but wanted to kickstart the idea i had last night.

37 things conspiritards believe: [JLB’s note: I spell it conspiratard, but there is no entry for this word in the Oxford Dictionary – yet – so I personally feel that either spelling should suffice]

2) ‘We’re all being deprived of free energy’

3) ‘All content – especially ‘truth’ related content – should be free’ [JLB’s note: Yep. This is the ‘tard litmus test, imho]

6) ‘if just enough normies ‘wake up’ , there’ll be a tipping point from which the cradle will rock, the bough will break, and down will come the lie system!’

7) ‘if only gold and silver were used again as money, we’d all be wealthier and the money lenders would lose their usurious power’

8) ‘there are pedophile rings that permeate hollywood, the halls of congress, on upward to the international power structure’

11) ‘there are some topics too taboo to talk about, and discussing them in public will hurt said movement(s) above’

12) ‘we are perennially on the brink of economic collapse’

will think of more..but prefer others chime in with even better bullet points.

13) The world is controlled by shapeshifting reptilians.

15) All US presidents and their spouses were or are transsexuals.

16) CERN is changing our reality with the Hadron Collider known as the Mandela effect.

17) All closed Wallmart stores are being turned into prisons run by FEMA.

18) The current wildfires in the US are started with energy directed weapons for the purposes of weather manipulation and carrying out Agenda 21.

19) Things used to be a lot better back in the day, almost like a utopia, but then the evil puppet masters started enslaving everyone. Now things have degenerated, we are all fucked. Fight, or give up.

20) Google/internet is collecting data on everyone for nefarious purposes.

21) The evil elite is motivated by greed. “They want your money!” (in a george carlin voice).

22) The military has top secret advanced technology that would blow your freaking mind.

23) Some/many primitive societies were extremely intellectually advanced, much moreso than today. There used to be advanced knowledge and skills, but most of that has been lost, or kept secret.

24) There are real life James Bonds.

25) There is a hierarchical structure to the evil elite, therefore, there must be a single man(or woman) at the very top of the elite. And that person is a jew, a lizard, or an alien. Hahahaha, they dont realize its actually a 31 year old dude in Australia!

26) The official story, and ancient history, is a lie. What really happened was incredibly fantastic and amazing, mind blowing.
“Do you want to know what really happened? Throw another log on the fire and have a seat, and Ill tell you a tale of what REALLY happened.”

27) The reason for all the 911 syncs (The Simpsons, Back to the Future, Supertramp cover, etc) is because the evil elite was dropping clues, predictive programming by evil geniuses. For instance, Robert Zemeckis must have consciously known about plans to do 911, and so he consciously put clues in Back to the Future to warn about the attack.

28) Reading words is terribly boring. [JLB’s note: Lesta told me to say he likes this one the most]

29) The environment is totally fucked. The earth is being swarmed by once-lers.

Watching youtube videos is research, not entertainment. [JLB’s note: Sorry bro, been done, see #10. Although I personally like the ‘research vs entertainment’ angle better, because that is what most ‘research’ is: mere entertainment dressed up as productivity]

31) If a charming scumbag on Youtube makes a claim, or engages in fantastic speculation, and they do so without a single shred of solid evidence, that doesnt mean the scumbag is a story teller. Listening to speculation and baseless claims can be educational, and research, not entertainment.

32) The evil elite is constantly pulling off hoaxes, but somehow they always goof up their hoaxes. But if we pay close attention to the news, and pick apart their hoaxes looking for goofs, we might be able to find the “golden goof”, the smoking gun, the goof that proves to the world what the evil elite are doing. The goof that will expose the elite and blow this case wide open!

Ah, thats enough for now. Lots of overlap, mostly I was trying to remember how I used to think about the world. Good idea Dante