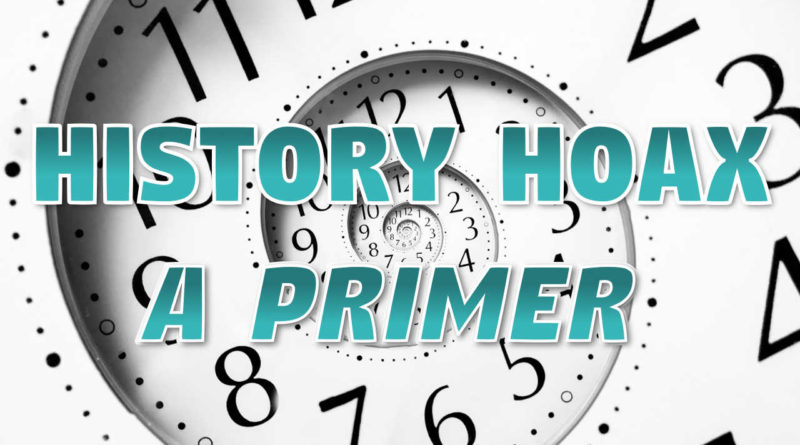 Over the coming weeks I will be releasing a swath of material related to the History Hoax. I understand and appreciate that a few Full Members of this website remain incredulous towards the notion that ‘all of history is fake’. After all, how could all of the historians be wrong? Why hasn’t anybody told us yet? If history as we know it is fake, then what actually happened? Where do we come from? How long have we been here? And so on and so forth.

When I first got into the ‘alternative’/’conspiracy’/’truth’ (ACT) scene back in 2013 there were several content creators who I respected as legitimate researchers. Had any of them suggested that ‘history is a hoax’, I honestly don’t know how I would have reacted. It just seems so ‘out there’. I might have been repelled from them or possibly even begun to suspect they were ‘shills’.

Yes, I was once a conspiratard. I’m sure many of you can relate to the experience of falling into a few ‘truth n00b‘ traps when you first began your trip down the yellow brick road.

I no longer respect any of those content creators as legitimate ‘researchers’. In fact, I am not sure that any of them do any genuine research whatsoever. This is another matter for another day. Suffice to say that it was only by going beyond what was presently available – beyond what others were talking about – that I began to uncover clue after clue after clue which all indicated that something was very amiss with the field known as ‘history’.

If you maintain belief, to any degree, in stories about ‘Ancient Greece’ or ‘Ancient Egypt’ or ‘Ancient Rome’ or ‘Ancient China’, then I recommend you take a note right now about your current thoughts on this topic. Perhaps find a pen and paper and jot down a few bullet points. Maybe leave a comment in the comment section below. Do something to record your current view for the benefit of your future self who may look back and wonder what was going through your mind.

I strongly recommend it.

Within a few months at most you will be laughing at stories in which you used to have complete. Stories which seemed so reasonable until one day they didn’t, and you found yourself wondering, ‘how did I ever believe such obvious bullshit?’

I can’t guarantee it and I won’t guarantee it. I can and do, however, predict it. My evidence base is my own experience. I used to believe all of the stories we are told about ‘Ancient’ times. I now see the History Hoax as being more obvious, more ‘in-our-faces’, than many of the lower orders of hoaxes combined. This is no exaggeration.

It is no mere ‘matter of opinion’, in my mind, that history is fake. I didn’t come to this position second or third-hand. I came to this realisation by looking for the primary source evidence to verify the official stories. Hours upon hours of checking citation after citation, and finding that all roads led back, eventually, to the same dead ends.

And those dead ends are not nearly as far ‘back’ as one might assume.

Throughout the roughly two years I have spent compiling this research in piecemeal fashion, I have also been slowly but surely learning about the modern human and how he works. This has allowed me to push through barriers which might stop other would-be researchers from going down the paths my own research has taken me.

The fact of the matter is this: humans love stories. They crave them. When deprived of stories, they will create their own. Humans will believe and repeat the most fantastical and ridiculous of stories without pausing for a moment to consider if said stories have any basis in objective reality. This is because, in many instances, these humans have no conception of an ‘objective reality’. They have more in common with trained parrots than they do with the idealised version of man which many of us still maintain in our own mind.

Storytelling requires only repetition – it requires no thinking whatsoever.

It is right there in the name of the field: history. If you want to believe that this is a mere ‘coincidence’ then I won’t even try to change your mind.

These stories are so widely-believed, accepted and repeated, that few of us are likely to ever question them in any meaningful way. We don’t even see that we are in fact immersed in stories. In this sense, the History Hoax is necessarily going to be too hard for many to see, precisely because they have become numb – oblivious – to their own storied existence.

Put another way, ‘history’ is so much a part of our existential/epistemological framework that in most cases we don’t even know it is there.

If you have any preconceived notions about David Foster Wallace, please put them aside when considering the merits of his ‘two young fish’ parable.

It is my position that the same parable applies to our understanding of history. The fish don’t know they are swimming in water, the average person does not know he is immersed in stories.

Lately I have used the following clip from Dark City (1999) in several different pieces of content. If it were not already clear before, its relevance to the History Hoax might come into more focus now:

Detective Walenski later went on to jump in front of a train. Perhaps he could have used some more sunlight and vegetables rather than stuffing himself away in a dark, untidy room. I’m going to suggest to you that, if it is the case that ‘history’ as we know it is one big joke, this need not be sad or even ‘bad’ news. On the contrary, a genuine realisation and understanding of the History Hoax may lead one to a spiritual and psychological freedom of unparalleled scope.

My own personal view at this point in time is that this is all one big joke. We can either laugh or we can cry. After much contemplation and soul-searching, I have made my decision as to which is the most sensible attitude to adopt. This general sentiment is what led me to create Plate of Brass.

I’m going to be having fun with the History Hoax. If the ‘victim’ of a joke is the one laughing the loudest, then who is the joke really ‘on’ (if anybody)?

2 thoughts on “The History Hoax – A Primer”