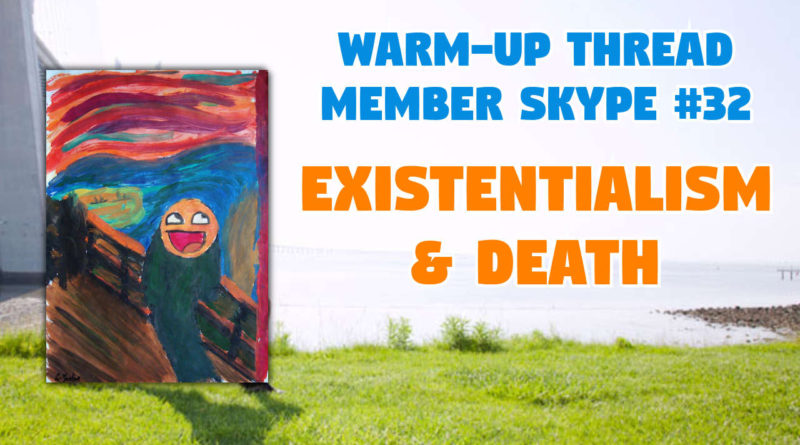 This is the Warmup thread for Member Skype Call #32, which is focused on existentialism and ‘death’.

Suggested by Dante from New York. Why did I put inverted commas around ‘death’? Good question.

‘Existentialism’ is a word we can use to describe the practice of pondering about the nature of our existence.

It is considered a distinct sub-branch within philosophy, but ultimately all branches tie in with one another.

In fact, official sources will try to tell you that existentialism is a doctrine, with certain inherent/common beliefs among ‘existentialists’.

For the purpose of this call I will be ignoring that suggestion.

To me, ‘existentialism’ is a word I use to describe the practise of pondering the nature of our existence.

If you have ever found yourself wondering, ‘why the hell am I here’, then you have spent at least some time dealing with existentialism, as so defined.

A lot of people cite Nietzsche as an existentialist philosopher. Others cite Kierkegaard as the ‘original’ or ‘pioneering’ existentialist.

While I am sure that these dudes had interesting things to say, what I’m looking forward to in this thread (and associated call) call is hearing what you have to say.

In Member Skype Call #29 we discussed stories, meaning, and purpose. It was a thoroughly enjoyable call, as both participant and listener.

In Member Skype Call #31 we discussed The Thirteenth Floor, a film which explores questions about the nature of our reality and our existence.

Some people truly believe that we are living in a ‘computer simulation’.

Even if this were indeed the case (I doubt it), where would our meaning come from?

In a world which may seem absurd, how could any thinking person not feel the occasional sense of disorientation?

I don’t know about you guys but every now and then, I find myself wondering, ‘what the hell is going on here?’

Sometimes I ask myself directly, in my own head: ‘Seriously bro wtf is this world?’

I don’t know where that voice comes from. I assume it is my own.

This just leads the the next problem of wondering what ‘I’ am.

I’ve got some hypotheses about things, some theories (in the general sense of the term).

Have you ever had a dream where you were certain you were going to die?

And then you ‘woke up’ and it was just a dream?

I have, many times. Although oddly, not lately (that I can remember, anyway).

In MSC #31 the topic of ‘lucid dreaming’ came up, although only relatively briefly.

The topic deserves an entire call all to itself.

Anyhow, there is a film called Waking Life. Many of you will have seen it.

The protagonist is encouraged to test to see if he is dreaming, by flicking the light switch in any room he enters.

Might sound crazy, at first. You know what sounds crazy to me?

Waking up every day and following the orders of some shmuck just to get paid a living wage.

Sitting around an office with a bunch of turkeys who honestly believe that they evolved from bacteria.

Day in, day out, for forty years.

Now that is insane to me, but it does give the Epsilons meaning.

And there are far more Epsilons out there than there are JLB’s.

And as we discussed in MSC #27 (expected release date some time next week), the proportion of Epsilons out there grows with every passing year.

Everything appears to be going to somebody’s plan…

So it seems silly to me to bemoan the absurdities of the normie life. They seem happy enough.

What I ought to concern myself with is my own happiness, my own contentedness with life.

And when I feel I have purpose, I feel good.

But I have to give myself that purpose. I have to find goals and work towards them.

It would all be so easy if I were just suggestible enough to believe that some book, or some dude on the TV, could give me purpose.

Perhaps if I were to spend a decade or so damaging my brain via heavy substance abuse, I might be able to regress to such a level of buffoonery.

Alas, this is beyond me, at least for the time being.

I find myself in what seems like an somewhat-happy truce with the Kosmos.

It plays jokes on me, and I laugh along. Well, I try.

What else is there to do?

I suppose I could always jump in front of a train.

But what if I do that and then simply wake up in my bed, still intact?

That would be rather embarrassing for all parties concerned.

Sometimes I wonder how interactive a film can be.

What is supposed to be a one-way transmission can seem like a truly two-way experience.

When I reviewed The Thirteenth Floor the other night, I found myself asking:

Was this film made specifically for me to watch right now, in this very moment?

I know the answer to this question.

Well, I know the appropriate answer. The one I would give if asked by another ‘human’.

Speaking of humans, these two supposedly wrote some cool stuff. I wonder if they were truly happy.

I look forward to the call this weekend. Hope to see you there 🙂