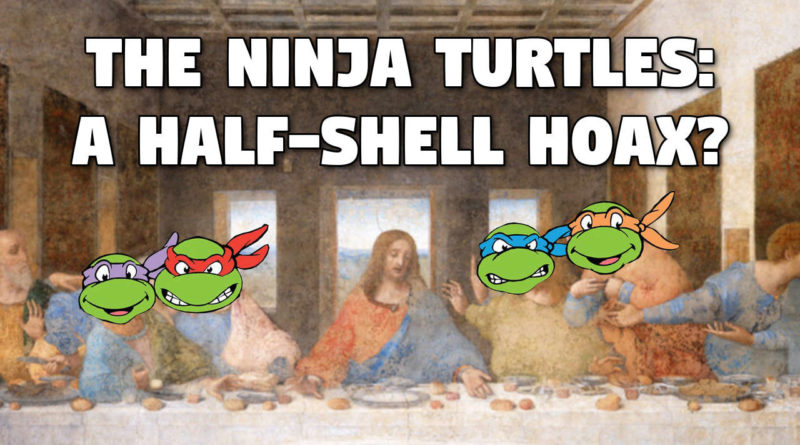 Nobody died, nobody got hurt, period. That’s a fact.

Okay, it is more my honest suspicion than a ‘fact’.

After all, what is a ‘fact’ in the first place? What can be said to be ‘known’?

Well, this isn’t the time or place for epistemological musings.

What matters is that this website, johnlebon.com, will be the first and only platform in the known world to investigate the legitimacy (or otherwise) of the stories of the four artists whose names were used for the chief protagonists of the Teenage Mutant Ninja Turtles.

In the comment section of daibpdaibp’s brilliant piece about the ‘Alfred the Great’ Hoax, Brandon Berry joked about the historical legitimacy of the four individuals listed above. I was amused at first, and then I realised that this could make for an entertaining group project.

What if four of us each volunteered to investigate one of the four characters in question?

Brandon Berry was quick to accept the challenge and will taking a closer look at Leonardo.

Daibpdaibp then stepped up to the plate and will be inspecting the stories of Donatello.

Take No Gnosis was not to be left out of the party; he’ll be reporting back with his findings on Raphael.

That leaves Michaelangelo do Lodovico Buonarroti Simoni (or Micky de Buon, as he liked to be called).

If no other Members of this site would like to enlist for this particular project, I’ll be more than happy to apply my Primary Source Research Method to the official story of Micky de Buon.

Alternatively, if anybody out there would like to take care of MDB, I’ll instead turn my attention to the broader story of ‘ninjas’, something I have long suspected of being nothing more than mythology (recently-fabricated mythology, no less).

The beauty of having several different people investigate the historical characters in question is that it will demonstrate the objectivity of the primary source approach.

This isn’t just myself or TNG or Al or DD or any other single individual noticing that the primary sources don’t exist.

This isn’t some quirk of us as individuals, or some kind of ‘blind spot’ which we all must be suffering from on a micro level.

It isn’t a matter of failing to find the primary sources because we aren’t ‘looking hard enough’, or ‘not looking in the right places’.

The primary sources can’t be found, because they don’t exist, because history is a HOAX.

NOTE: It is still, in my opinion, theoretically possible that history is ‘real’. Who knows?

Perhaps one of the four Renaissance characters about to be investigated may have a credible backstory, replete with primary sources of traceable provenance.

I don’t wish or intend to guide the outcome of the investigations, and if any of the Members partaking in this project find evidence to support the ‘history is real’ conclusion, I might just about be the happiest person on the planet to hear and read about it.

I’ll publish whatever the Members find, and am sure that the readers here will be pleased to inspect the research for themselves, wherever it may lead.

We are dealing — IMO — with a truly grand and spectacular HOAX, one which entails consequences and corollaries which few (if any) of us could have imagined we might be facing, when we first set foot in the ACT realm.

As interesting and important and foundational as they all may be, they don’t come close to the History Hoax, in terms of what this tells us about ‘where’ and when we live.

And as outrageous as it sounds, we are going to take another leap forward in demonstrating this to be the case, here at johnlebon.com, by inspecting…

There is no set completion date for consitutent elements of Project Ninja Turtle.

Each contributor will take as much time as they need to sift through the sources and write up their reports.

Anybody who has taken a trip to Tucson will know how tedious, time-consuming and tiring the process can be. These things can’t be rushed.

To BB, DD and TNG, thank you very much for volunteering to take the drive with me out to Tucson. I promise not to play my 90s mixtape the whole way there.

Will we be joined by any other brave souls on this fateful journey? Only time will tell.

When it is all said and done, I predict that BB’s original joke may have acted as the genesis of something very special…

In the meantime, here’s a couple of ‘coincidences’ which some of you might find interesting.