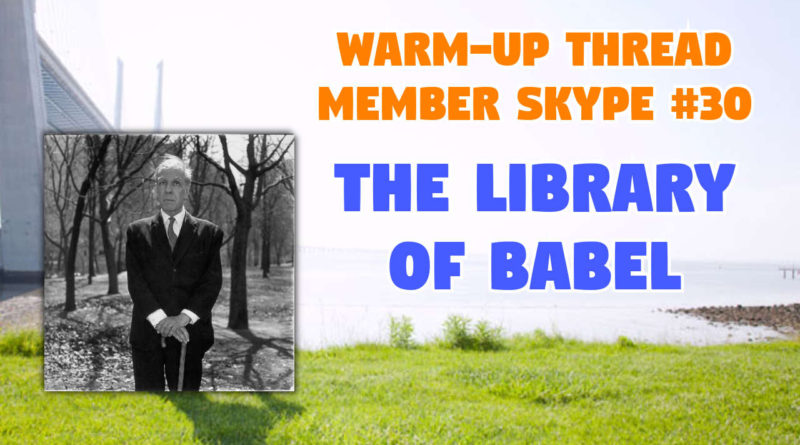 This is the Warmup thread for Member Skype Call #30, which is focused on The Library of Babel (1941) by Jorge Luis Borges.

This is a very short story, which anybody could read and review in less than an hour.

Access the full story in pdf form here. As you will see, it is only seven pages long.

You can access a 2015 discussion of the book (and some of its themes/ideas) by James Corbett here.

I also hope to discuss Borges’ one-paragraph short story On Exactitude in Science (1946). You can see it here.

For those of you who enjoy ‘reading ahead’, I highly recommend Borges’s slightly-longer short story Tlön, Uqbar, Orbis Tertius (1940), which you can see here.

In time I will explain why I consider these three stories in particular to be of so much importance to the would-be deprogrammer.

For now, here are some key premises of the overall framework I will soon try to share:

i) The official story about human history is that a lot of it was ‘lost’ in the ‘Library of Alexandria’.

-> See Burning the Library of Alexandria.

ii) Brewster Kahle, the man behind the Internet Archive, considers his work to the modern ‘Library of Alexandria’.

iii) ‘History’ as we know it is being written as we speak; the past is being pushed back further with each new ‘discovery’.

-> See The History of Histories.

iv) The modern person’s life is being recorded and documented whether or not they realise it.

v) The distinction between the ‘real’ and the ‘simulation’ may not be as clear-cut as some seem to believe.

-> See Simulacra and the Silverfox.

The Library of Babel deals with information and the broader concept of epistemology i.e. what can be known.

On Exactitude in Science deals with the difference between the map and the model i.e. the thing and the representation of the thing.

Tlön, Uqbar, Orbis Tertius deals with the ‘fictional’ tale of history being written and then being ‘discovered’ in that order…