I have put together an official topic schedule for the next few weeks worth of Member Calls.

With quite a few new Full Members on the site, the time is ripe to discuss some relevant films.

And if I go silent, tell them to search for me near the hippie festival in Hanoi…

7 – What about this weekend?

The response so far to the most recent MDC, based on Twelve Monkeys, has been very positive. 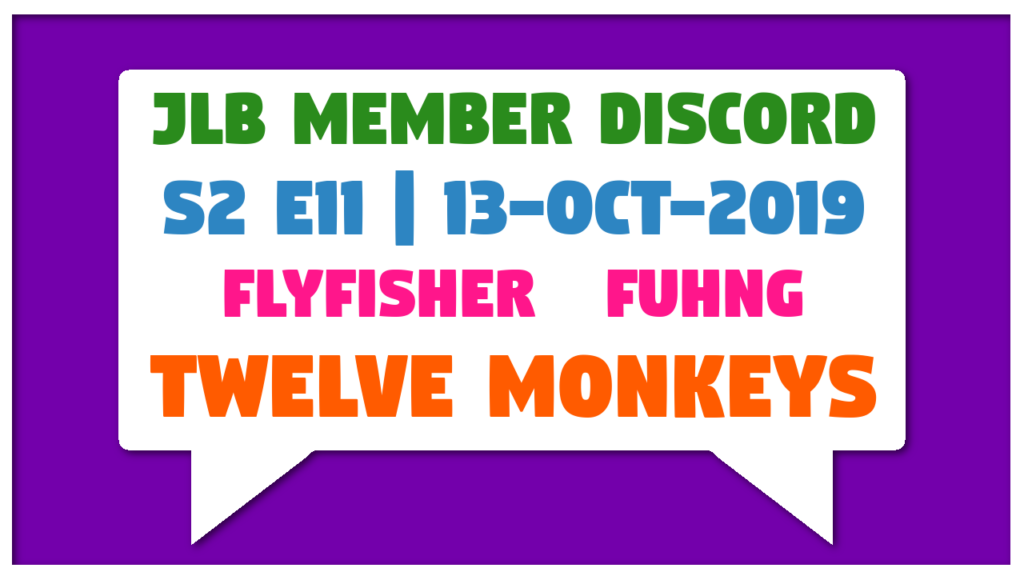 For the next few weeks I would like to stick with the film-centric Calls.

The benefit of using films as the centre of discussion is that it opens up countless avenues for conversation about:

And, depending on the film, conversation can also revolve around:

There’s a few films that we are well overdue discussing.

With nine new Full Members having joined the site in the past seven weeks, I hope and expect that we will see at least a few n00bs making their Member Call debuts over the next month or so.

New Members in 2019 who have already appeared on at least one Member Call:

Daibpdaibp appeared on S2E8 and S2E9.

Full Members who have joined the site in 2019 (prior to September) and are yet to make their debut:

New Full Members who have joined in just the past seven weeks:

I honestly do not know why there has been a sudden bump in new Full Members, but obviously I am delighted to see it.

Who are these individuals? What brought them here?

What are their favourite topics? How long have they been interested in the conspiracy subculture?

Do they agree with my take on the outer space hoax? The dinosaur hoax? The nuke hoax?

Do they believe the forces who run the show are evil? Or do they have a more optimistic outlook on things?

These are the kinds of questions which I for one am looking forward to exploring.

Some of the new Members will not feel inclined to partake in the Member Calls, at least not at first, and this is entirely understandable.

It can be a little daunting, especially for those who have never been involved in podcasts before.

However, I’m sure at least two or three of them will find their way onto the Discord server sooner or later, and I for one can’t wait to chat with them.

By focusing on films, it will make it easier for the new Members to pick and choose which episode they would prefer to make their first appearance for.

November 9/10 -> The Matrix
[fuhng nominated Sunday, will be November 10, see comments below]

They Live, Network, Terminator II, Wag the Dog, Capricorn One, and many, many more.

I’ll make myself available every Sunday from 9am my time until 11pm my time.

All you need to do is nominate a two-hour block that suits you, and that you know you can commit to, and I’ll set it aside.

I’ll then announce that time as an official Call time and anybody else who wants to join us will be welcome to do so.

For illustration, prior to last week’s Call, Flyfisher nominated 10am my time, and then fuhng replied that he would join the Call as well.

I think it is fair to say that the discussion which ultimately followed was well worth the small amount of planning which went into it.

This means there is a 14-hour window between:

if you live in New York, the window is from 10pm Saturday night to midday Sunday.

if you live in London, the window is from 2am Sunday morning to 4pm Sunday afternoon.

if you live in Melbourne, the window is from 1pm Sunday afternoon to 3am Monday morning.

You just need to nominate a two-hour block within that window.

I’m happy to set aside two blocks per topic/weekend, if one nominee’s time does not suit somebody else’s.

As I explained in the pre-Call post for Twelve Monkeys, this is the single fairest and most effective method I have come up with to ensure as many people can partake in these Calls as possible.

If Sundays do not suit you, then we can look at moving the Calls forward to Saturdays in the future (i.e. after these four Calls have been complete).

Please make sure that if you nominate a block, you can commit to it, because this system works on first in best dressed, so if you nominate a time and then fail to show, you’re not just letting me down, you’re letting the whole team down, too.

7 – What about this weekend?

I’ve been invited to do some pretty crazy things this weekend. Sorry.

The Calls will recommence next weekend, October 26/27, when we discuss Total Recall.

Firstly, a warm welcome. Take a look around, here is where all the Member-exclusive material can be found.

Two. If you haven’t received my Welcome email, please check your spam folder. It is very important.

Three. Huge thanks to those of you who have already responded to the Welcome email.

It helps me quite a lot.

Four. You don’t have to respond to that email. Entirely up to you.

But seriously, it does help me to know where new Members are coming from, what they are interested in, etc.

Especially because nine of you have joined in the last seven weeks. That is epic.

Where are you all coming from? How did you learn about this website?

Five. If you are thinking of joining us for the Total Recall discussion, you might want to check this out first:

The rabbit hole goes deep, and you have joined an eclectic bunch of gen-u-ine looney tunes.

…online or in so-called ‘real life’.

The topic schedule for the next four Member Calls is now set.

We will be focusing on films, because they open up lots of avenues for discussion.

This will hopefully encourage some of the new Full Members to make their Member Call debuts.

I’m available all day Sunday for each Call but you (anybody) need to
nominate and commit to a time within the nominal window.

I’m happy to be there for two Calls per Sunday, so long as they are planned in advance.

No call on the weekend of 19/20 October, for reasons I might elaborate on in a future Call…

If you’re new here, make yourself at home, please respond to your Welcome email,
and check out the Framework.