The Lie System in which we live is comprised of a seemingly-endless assortment of hoaxes which collectively serve to keep the average person, and society more broadly, in a state of abject confusion, distraction, and retardation.

Careful analysis of these hoaxes reveals that there is a distinct order among them, whereby certain hoaxes share characteristics related to significance and method of propagation, and can therefore be fairly categorised into groups of ascending importance.

The Hoax Hierarchy of the Lie System, produced and presented by John le Bon, is a visual conceptualisation of such a categorisation.

The first iteration of the Hoax Hierarchy was made public on February 1, 2016, and remains subject to further refinement and revision.

Below is an abridged copy of the current version. 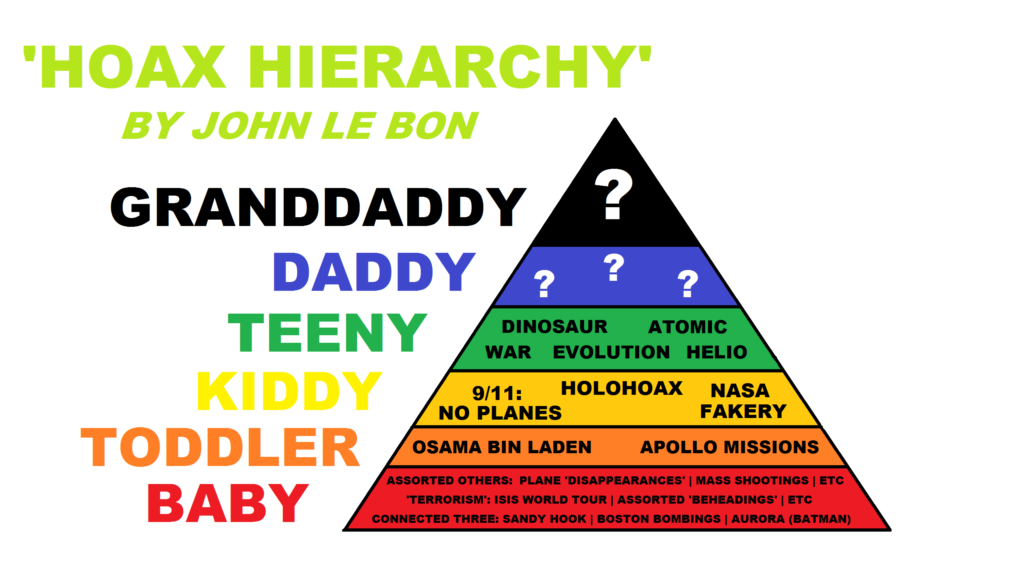 Upon its initial release, the Hoax Hierarchy generated notable interest and controversy among members of the so-called ‘truth movement’, particularly on YouTube.

Prominent Baby Hoaxsters such as Jeffrey C and PressResetEarth (leaders of the once-popular We’ll Do It Live google hangout, which was primarily centred on discussing Baby Hoaxes) immediately responded via a hastily-convened live show, but were unable to offer even a single logical or evidence-based objection to the concept or claims of the Hoax Hierarchy.

As you will see for yourself, JLBE1615 (which first introduced the Hoax Hierarchy to the public) made thinly-veiled references to the Baby Hoaxsters and other prominent names in the YouTube ‘truther’ scene.

The first iteration of the Hoax Hierarchy, as seen in the above video, contained only five orders of hoaxes.

In the months which followed the initial public release, the Hoax Hierarchy underwent further development.

During the middle months of 2016, an unprecedented number of large-scale Baby Hoaxes were broadcast to a world audience, including the 12-June Orlando Pulse Nightclub Shooting, the 28-June Istanbul Airport Terror Bombings, the 7-July Dallas Protest Sniper Attack, and the 14-July Bastille Day Truck Event, each of which was covered in real time by JLB as part of the Real or Hoax series of live shows.

Amidst this spate of Baby Hoaxes, an updated version of the Hoax Hierarchy, now with six orders of hoaxes, was released to the public on July 11 via the following video.

At the time of the above video’s release, the first stage of construction of the johnlebon.com website had recently been completed.

The video served the added purposes of promoting the website as well as the then-recently published podcast CR#08: Muhammad Ali Speaks Beautiful Truth.

By contrasting the Baby Hoaxes with the far more relevant and pressing topics of race realism (and statistical analysis of health outcomes for mixed-race children), the video sought to further highlight the comical impotence of the Baby Hoaxsters who at the time dominated the ‘truther’ scene on YouTube.

For more information about the orders of the Hoax Hierarchy, and the specific hoaxes of each, check the relevant pages listed below.

Granddaddy Hoax | May become available when the Apocalypse is complete.