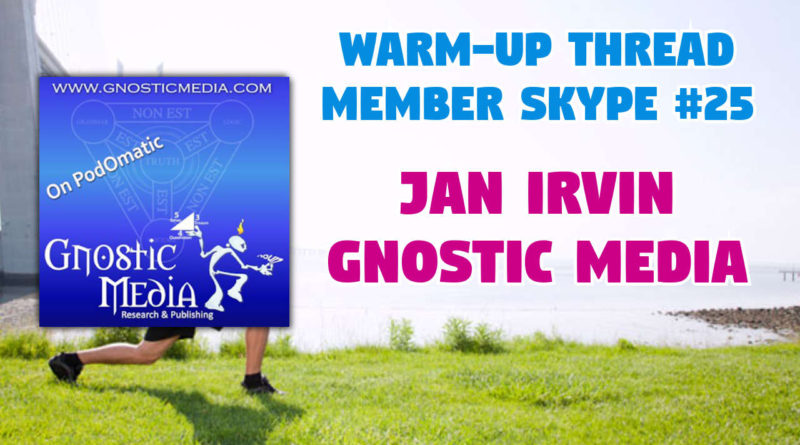 The call went ahead as planned. Although Jan Irvin was did not participate, it was still a terrific call.

The largest panel ever seen on the MSC, including BMSeattle who made an impressive debut.

As I explained during the after-call chat, my ‘real job’ — being seasonal — is back to full-time at the moment.

This means that it is going to take me longer to finish editing and then uploading calls for the next few weeks.

I have already pretty much finished this one, having cleaned up the audio and added external sound clips.

Now I just need to go back and balance the audio levels.

This is a tedious task to say the least, but one which has to be done.

Should be finished and ready to go by tomorrow. Thursday Australia time at the latest.

This is the Warmup thread for Member Skype Call #25, which is focused on Jan Irvin of Gnostic Media.

Apparently, Gnostic Media has recently been renamed to Logos Media.

I contacted Mr Irvin some time ago in regards to this edition of the MSC series, and offered him a cordial invitation to join us.

At this point in time, I do not believe we will be graced with Irvin’s presence for the call.

Not to worry, because there is a plethora of material for us to discuss.

Irvin has published several long-form papers/articles and been interviewed by countless outlets within the ACT realm.

I plan to focus on three of Irvin’s papers/articles and four of his interviews.

-> Irvin argues that ‘sex, drugs, and rock & roll’ is/was a psyop to turn the youth into zombies.

-> Irvin argues that the academic establishment is a mouthpiece for the intelligence agencies.

-> Host Greg Carlwood opens the podcast by saying that this is the worst interview he has ever conducted.

-> Two content creators I used to listen to regularly, discuss the work of some clown named ‘Fomenko’.

If time permits, I will try to publish some of my own re-research concerning Irvin’s work and claims.

Those planning to partake in the call are encouraged to read or listen to at least one of the above items beforehand.

Hope to see you there.