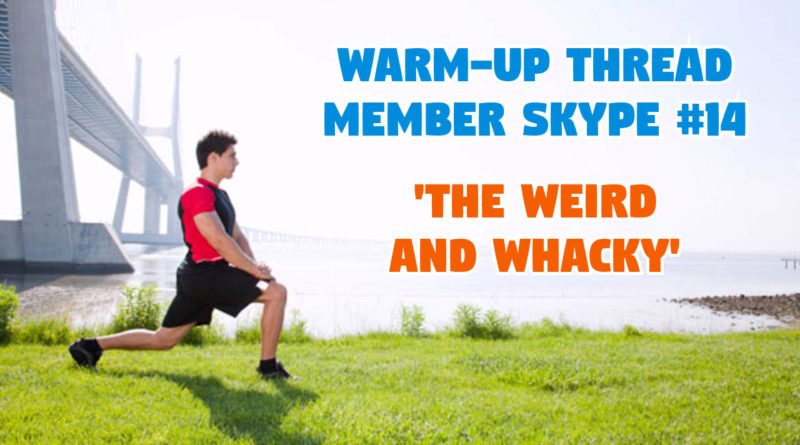 From now on I will be posting a ‘Warmup’ thread for each upcoming Member Skype Call.

These Warmup threads will give participants a chance to get up to speed with the week’s topic, and also get a read on the perspectives of others prior to the call.

My hope is that the threads themselves will generate insightful discussion in and of themselves, while also improving the quality of the calls themselves.

Soon I will be releasing the preliminary/nominal schedule for the next three months worth of Member Skype calls, as per this post.

Call #14 will take place on Sunday morning, April 15 (Australia time), which is of course Saturday night, April 14, US time.

Topic #14: The Weird and Whacky

The topic for MSC #14 shall be ‘the weird and whacky’.

I was inspired to select this topic after recently being contacted by a former member of the site, Danny Blitz, who left on good terms some months ago.

He had heard me in a recent Fakeologist call explaining that I do not believe in chemtrails, and so took the time to send me the following photos.

The following is copied verbatim from the email:

I heard you say on a recent audio that you don’t believe in chemtrails. I’m not sure exactly what you mean by that but I have attached some photos I took yesterday of some clouds made by planes in the sky above my town.

I was out of town for the moment the plane left the biggest trails initially, but the first photo shows the result of two earlier trails and another one being created over on the right. the second photo is a few minutes later. I also shot some footage if you want to see it. Years ago i had a lot of photos of this stuff and other phenomena in the sky but that material is on old hardrives in storage.

While it has been quiet lately, this was a very common occurrence some years ago over Ballarat. Often we would have no cloud cover at all for days if not for the planes trails spreading out and becoming it.

I don’t think these are contrails, which I have seen, and that dissipate quite quickly, this is something else.

Many thanks to Danny Blitz for taking the time to share his perspective, and evidence, with me like that.

It is certainly true that I do not believe in chemtrails, if the term ‘chemtrails’ means what I understand it to mean:

Chemtrails: intentional, cloud-like formations produced by toxic chemicals emitted from visible aircraft in the skies above.

It might be that some chemtrail believers have different ideas or understandings of what the term means, to them and/or to others.

This is one of the key distinctions between the work and thought process of critical thinkers and the regular masses. Critical thinking involves defining key terms and concepts at the outset, so that time is not wasted ‘talking past’ one another, or equivocating on meaning, or devolving into semantic arguments.

I encourage you to check out my (dry but informative) video series Thinking 101 for a further exploration of the importance of key terms and concepts.

In any event, the upcoming call will be a place for us to discuss topics like chemtrails and other topics of a similar bent. I am sure that this site is home to at least one or two members who believe in chemtrails, and I would love to hear what they have to say.

I also know for a fact that at least one or two members here are also interested in topics like the one I personally call ‘geographical apophenia’. Example below:

This is based only on inference, but I would also be willing to bet that at least one or two members here believe in aliens and/or ‘outer space’.

Perhaps there are a few who also believe in ghosts/poltergeists.

So these are the kinds of topics we can discuss here and during the call proper.

Some people might see my choice of title as a little bit too cheeky, maybe even condescending, but this is not my intention. For one thing, I am open to renaming the topic if anybody has a worthy suggestion to put forward. For me personally, I see the topic title as inviting those who may have been staying quiet about their own alternative views to come forward, without concern about it not fitting in with the general skeptical vibe of the site. I will obviously maintain my own skepticism, but this is one call where I will try to take a back seat and let those with ideas and opinions to share do just that.

Once upon a time I was against what I would call ‘speculative’ discussions, but now I see that for many (most? all?) people, their sense of wonder about this thing we call the universe is maintained/satiated by these kinds of speculations. I can’t ‘prove’ that Sync is a ‘real’ thing and yet it has enriched not merely my intellectual understanding of certain phenomena but life in general. While I would not put ‘chemtrails’ in the same category as sync, others might, and this goes to the heart of the matter: these things are subjective.

What is important one person may be meaningless to another; and vice versa.

So, before I have released the nominal schedule for the next 12 weeks worth of calls, I say we throw the floor open to what I would personally describe as the ‘weird and whacky’.

I will maintain my skepticism and am sure that others here will, too. Please do not get offended if you believe in things which other people find to be ridiculous.

Remember that I have largely made my name in this scene by ridiculing things like the Cavendish experiment. Ridiculing is part of my shtick, and I accept that being ridiculed back — often by functional retards — comes with the territory. A thick skin is a precious trait to develop and utilise not just online but ‘in real life’.

Related to Note 1, let’s all continue to treat others with respect. Friends can mock friends without causing or meaning offense, because it is all taken in good spirit. This is how I will treat others here and hope that others can treat me, too.

These ‘Warmup’ threads will be made available to the public, while the calls themselves will continue to be for Members only. If you want to keep your cards close to your chest, save them for the call proper. My hope is that by publicising the warmups, more people will feel inclined to sign up to the site and take part in the conversations.