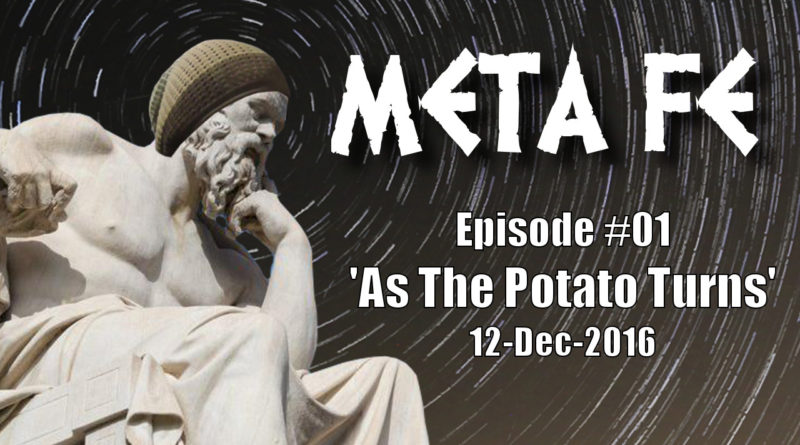 Meta Fe is finally in season, and the first official episode features a perfect guest to get the show rolling. Tomfoolery of the ISS (Tom) has recently attracted attention for his YouTube series entitled ‘As The Potato Turns’, a comical summary and analysis of the Flat Earth-themed reality-YouTube drama brought to us by the likes of Patricia Steere and her ‘FEOHP’. Tom’s series is set as a parody, with each episode in the series offering a concise synopsis of the broader story arc at the centre of Steere’s serial (as well as related shows).

Meta Fe is a sporadically-scheduled interview/roundtable vodcast/podcast focused on the meta aspects of the ‘Flat Earth renaissance’ which has taken the ‘alternative media’ scene by storm since early 2015. Rather than petty debates about the shape of the earth, Meta Fe focuses on questions regarding the sociology and psychology of the Flat Earth scene: who is leading/following this online ‘movement’, and why? How do these people interact with one another, and are these social dynamics predictable? Where is this ‘movement’ headed, and what can it teach us about the ‘truth movement’ in general?

Available in both mp3 audio format and video format as well. All visitors have access to the mp3 audio file below; Free Members and Full Members can also stream the video when logged in.

Production note: The show was broadcast live via google hangout which can sometimes lead to unequal volume. The levels were adjusted about 10 or 15 minutes into the discussion so please bear with it for the early portion of the show.