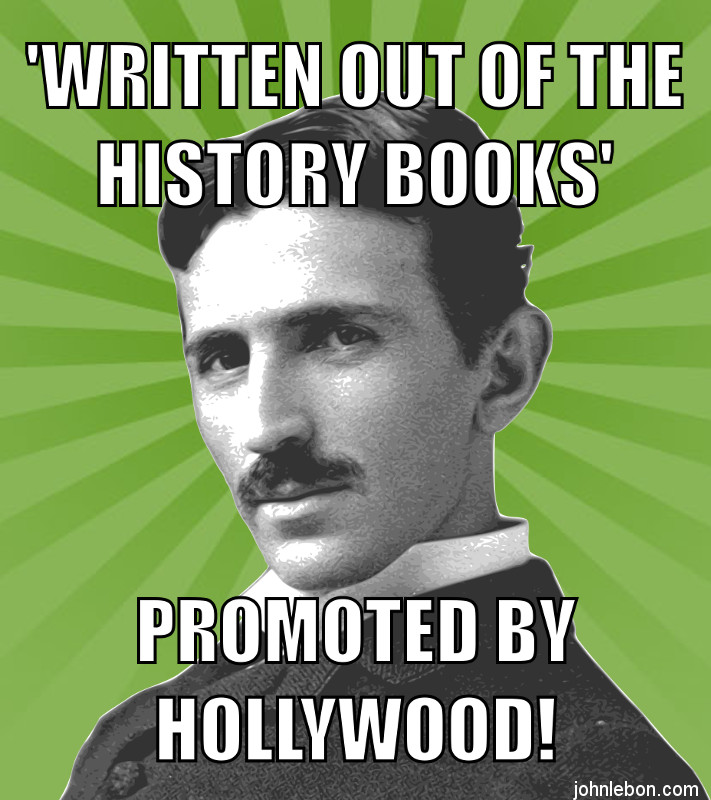 One thing that normies and ‘truthers’ tend to have in common is a reverence for and fascination in the historical figure known as ‘Nikola Tesla’.

According to many, Tesla was a great inventor and suppressed genius, who was written out of the history books. Some claim that his best work was stolen by the authorities, who later used it to develop ‘direct energy weapons’ which brought down the Twin Towers. But what do we really know about Tesla?

It seems that few if any of the people making grand claims about Tesla have bothered to read the primary source evidence for themselves. If they had done their own research, the would-be proponents of Tesla would know that the man’s own words debunked most, if not all, of the grand claims made about him since. See this playlist for more information.

But Tesla was a great inventor! He was written out of the history books!

These claims may well be true, but ask the typical conspiritard for the evidence to support these claims, and you will likely be met with righteous indignation. How dare you question the achievements of Tesla? What are you, a paid shill?

It turns out that, just like most (if not all) popular conspiracy theories, the most devout believers are typically the least likely to actually read non-fiction books. Be it Tesla, crop circles, ancient aliens, Roswell landings, Hitler’s advanced technology, or any of the other heavily-promoted ‘conspiracy theories’, believers tend to get their information second and even third-hand, often from History channel (or similar) ‘documentaries’ which have no more basis in reality, and no more emphasis on primary source evidence, than an episode of The Flintstones.

What makes you think you know so much about Tesla?

For one thing, JLB has actually taken the time to read Tesla’s own words, as they were printed – what might be termed ‘primary source evidence’. This approach to research may be considered old-fashioned by modern-day ‘researchers’, who rely on YouTube videos for their (mis)information. You can hear more about this ‘primary source evidence’ research method in the following podcast, which goes into some detail about the problems facing the official conspiracy theories regarding Nikola Tesla.

Why is the story of Nikola Tesla so important?

There are two major reasons why a proper analysis of the history and historiography of Tesla is of critical importance to genuine skeptics.

First, Tesla underpins the ‘Direct Energy Weapons’ conspiracy theory of 9/11. According to the likes of Judy Wood, the Twin Towers were brought down by ‘direct energy weapons’ that day, and these weapons were built upon technology stolen from Tesla by the Morgans. To this day, only a tiny minority of the Western population is familiar with the ‘no planes’ theory of 9/11, and many of these people subscribe to Judy Woods’ ‘DEW’ account. If it can be shown that the entire Tesla narrative is mythology, this instantly undermines the Judy Wood narrative.

Second, the Tesla mythology provides a perfect insight into the mind of the typical conspiritard. When one comes to understand that there exists no reliable evidence to support many of the claims made about Tesla’s life, and then contrasts this with the conviction held by those who truly believe in the Tesla mythology, one may come to see how little research is actually done by those who call themselves ‘researchers’, and how little the truth matters to those who consider themselves part of a ‘truth community’.

For JLB personally, it was the ad hominem attacks he was subjected to, by those who had previously supported his skepticism, which opened his eyes to the fact that there exists today almost no genuine, independent, capable researchers.

The following video provides a simple introduction to Tesla Mythology:

Why or how can an understanding of the Tesla Hoax unlock far more important information?