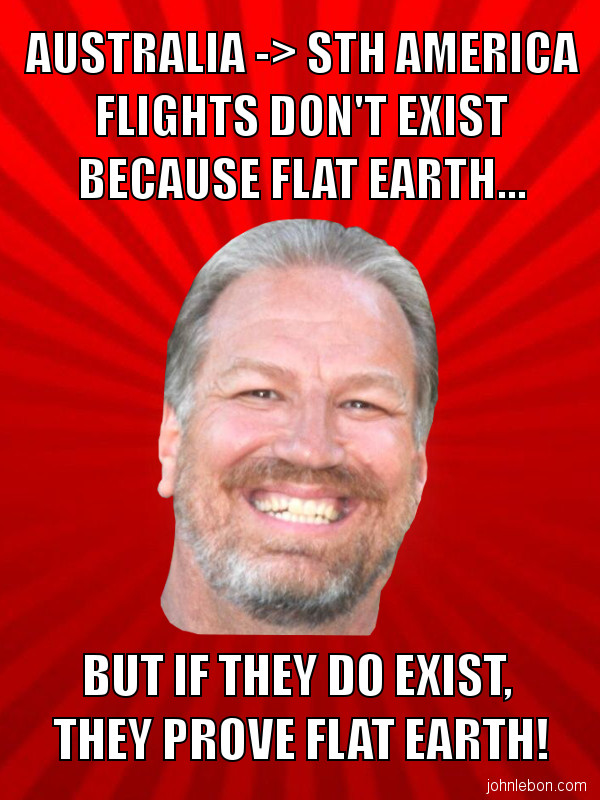 There are many problems with the Flat Earth belief system, and JLB has exposed more of them than just about anybody else on the internet.

But why waste your time debunking Flat Earth?

This is a common question. There are a number of reasons why JLB has spent considerable time debunking the Flat Earth belief system and, once you understand these reasons, you may come to realise that it has been no ‘waste’ of time whatsoever.

Firstly, genuine skepticism entails open-minded analysis of both (or all) sides of a debate or issue. In the case of the shape of earth, the leading positions are the orthodox heliocentric cosmology, taught in schools as truth, and Flat Earth, pushed by several YouTubers who first began gaining prominence in early 2015. Less popular are the position of ‘geocentrism’ as promoted by Robert Sungenis, and ‘Concave Earth’ (or ‘Cell Earth’) as promoted by a man who calls himself Lord Steven Christ.

As somebody who had produced content skeptically analysing the heliocentric belief system, it was incumbent on JLB to also properly scrutinise the major competing belief system, which from 2015 to the present time was and remains Flat Earth belief. In a nutshell, it is important for honest critics of one side to be honest critics of the other side(s) as well. As a leading debunker of the heliocentric cosmology, it is incumbent on JLB to also debunk Flat Earth belief.

Secondly, there is an argument that there exists an element of responsibility (or ‘duty of care’) involved in this line of content production. As the man who single-handedly brought exposure to the nonsense of the Cavendish experiment, and as the host of the popular Ball Earth Skeptic Roundtable circa (June-August 2015), JLB had played a notable (albeit unintentional) role in the rise and spread of the Flat Earth belief system on YouTube. As the leading promoters of the belief system began to turn their following into a cult, and as more evidence came to light about the problems facing the belief system, and then as the leading promoters revealed themselves to be dishonest charlatans, it became clear to JLB that he ought to use his standing in the scene to debunk Flat Earth in no uncertain terms.

Thirdly, Flat Earth stands between honest inquirers and the truth. If modern scientism orthodoxy is indeed fallacious, and heliocentrism is yet another ridiculous lie taught to the masses as fact, then it is important that those who see through the lies call out the charlatans who attempt to profit from the lie system. In the case of the shape of the earth, the Flat Earth belief promoters are taking advantage of the lie system by selling the masses a new lie to believe in. If truth is axiomatically or a prima facie good, then debunking Flat Earth promoters is a good in and of itself – as is debunking heliocentrism promoters.

But I thought JLB was a Flat Earther! Didn’t he host the Ball Earth Skeptic Roundtable?

A common misconception floating around the internet is that JLB is or was a Flat Earth believer. This misconception primarily stems from three related but distinct factors: 1) Most people are too retarded to understand that being open to an idea/concept is not the same as believing in the idea/concept; 2) Most people are too retarded to understand that the ‘heliocentrism OR Flat Earth’ paradigm is a false dichotomy, and disbelief of one does not entail belief in the other; and 3) Many retards (and charlatans) within this scene are propagating the claim that JLB is/was a Flat Earth believer, in live hangouts and in comments sections of various YouTube channels.

In fact, anybody who takes the time to listen back to the Ball Earth Skeptic Roundtable will soon realise that JLB was debunking Flat Earth arguments from the very first episode. They will also realise that JLB stated, in plain English, on numerous occasions, across the entire season, that the ‘heliocentrism OR Flat Earth’ paradigm is a false dichotomy, and that disbelief in heliocentrism should not lead one to automatically accept Flat Earth belief.

The BESR was wildly successful at a time when independent, weekly, live google hangouts were still a relatively new thing, and the ‘Flat Earth renaissance’ was only just beginning to take off. Since then, a number of personalities within the scene have used their YouTube channels as vehicles for making shekels, via YouTube monetisation (i.e. ads), donations, ‘experiment’ fundraisers, alternative media subscriptions (e.g. Truth Frequency Radio), and so forth. JLB could have used his position in the scene to cash in and ride the Flat Earth wave to shekelville. Instead he wound up the BESR when it was at its peak (and to the disappointment of his co-panelists), and then set about debunking Flat Earth arguments one by one – a process which has now been ongoing for over one year and for which there is no end in sight.

In short, anybody still parroting the claim that JLB is or was a Flat Earth believer is either a retard or a charlatan. Period.

But if the earth is not a giant spinning ball, then it has to be flat!

Please stop being a retard.

I am open to hearing arguments against Flat Earth belief. Where can I find your best arguments?

Between 2015 and 2017 I produced no less than 50 videos in which I critiqued, debunked or mocked the Flat Earth belief system. In the following presentation I go through the playlist from start to finish.

See this debate between myself and a man who, at the time, was one of the leading Flat Earth promoters on YouTube, and a leading figure in the Potatohead reality TV series which centred on the lives of Flat Earthers. note that immediately prior to this debate, Antonio had been invited onto the panel of LobeBusters to be prepped on the best arguments for Flat Earth belief, in a not-so-subtle attempt to prepare him for the debate. If you pay attention, you will quickly realise that the Flat Earth belief promoters do not actually have any evidence to support their Flat Earth ‘proofs’, and quickly go to water when challenged to produce that evidence.

For those with existing belief in Flat Earth, and those with poor attention spans, the debate may be frustrating to listening to, bordering on tedious, because JLB focuses on matters of logic, such the difference between inductive and deductive arguments, and so on. He also demands that Antonio substantiate his claims with actual evidence, which is not something that Flat Earth believers are generally used to having to respond to, and as such Antonio is unable to produce said evidence, leading to a potentially unsatisfying listening experience. On the other hand, for those interested in genuine skepticism, epistemology, and an honest analysis of the shape of the earth, the debate will prove rather illuminating, and you are encouraged to take notes while listening. Both participants in the debate, via their questions and answers, yield insight into not only the Flat Earth belief system but Flat Earth believers themselves.

Why do you keep calling Flat Earth promoters ‘charlatans’? What if they actually believe what they are saying?

Some of the prominent Flat Earth belief promoters may indeed believe in Flat Earth. Having spoken on and off-air with many of the leading FE promoters, JLB is of the opinion that several of them do indeed believe their own nonsense, and may be suffering from genuine delusions of grandeur. Note that many FE promoters claim that this is the ‘umbrella conspiracy’ which will soon ‘go mainstream’, ‘bring down the government’, ‘bring down NASA’, and even ‘go from 5% (acceptance) to 95% overnight’. It would be very easy for a regular nobody with little going on in their regular lives, who suddenly gets thousands of views on his YouTube videos, to believe he is on the vanguard of a mass awakening which will change the world. This is especially so in fringe online communities where the audience is largely comprised of A) lonely, lost people seeking community, and b) disenfranchised individuals who have rejected government authority and are thus (consciously or unconsciously) seeking new authority to look up to.

Thus it is quite likely that several of the leading Flat Earth belief promoters do indeed believe the nonsense they peddle. However, there are several obvious examples of charlatanism to be found among the leading promoters. For a classic example, see the video below.

How does it hurt you if people believe in Flat Earth?

It doesn’t. People can believe whatever they like. We live in a world where most people genuinely believe they live on a giant spinning ball, hurtling at break-neck speed around the sun, which was created by a ‘big bang’ out of nothing, billions of years ago, and that they evolved from fish, which themselves evolved from a ‘primordial soup’, and that giant-lizard birds of millions of years ago evolved into modern-day flying birds. And that is only the beginning of the nonsense most people believe. Given that we live in a time of almost unimaginable mass deception and general retardation, belief in Flat Earth is relatively harmless by comparison.