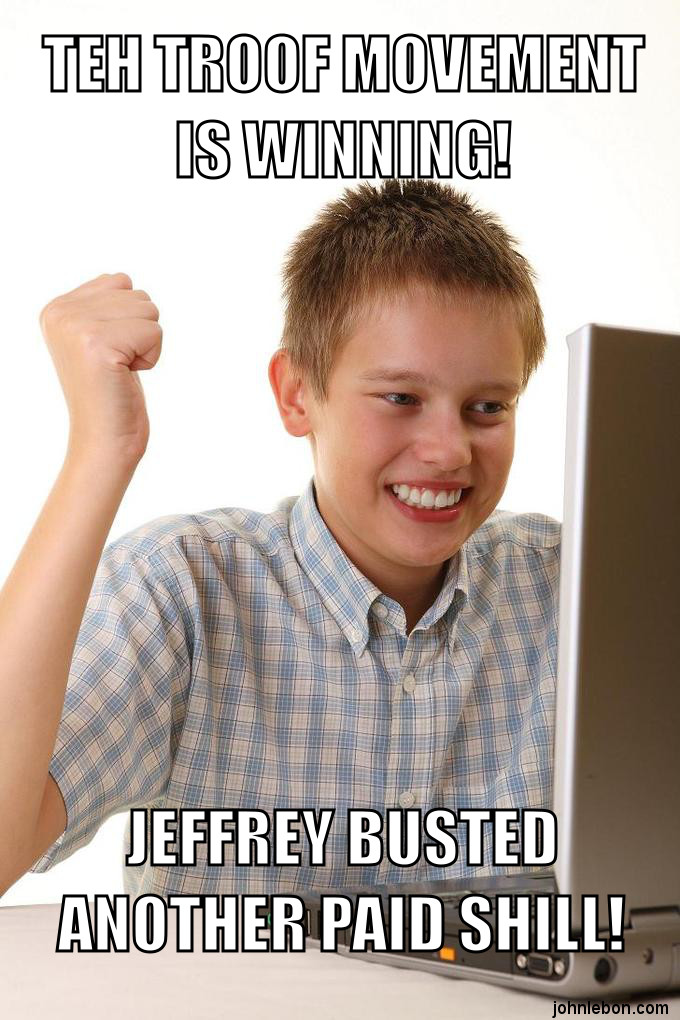 In the echo chamber of the so-called ‘truth movement’, it seems like every man and his dog are certain that ‘paid shills’ lurk in the shadows, just waiting to spread disinfo in order to undermine and disrupt the honest work of genuine ‘truthers’. The question is, do these ‘paid shills’ even exist? If so, what evidence is there to verify such a claim? Since late 2015, JLB has been asking the ‘truthers’ for their evidence to prove the existence of ‘paid shills’, and so far none has surfaced. Does this mean that paid shills do not exist? No. It simply means that the Chicken Littles who spend countless time fearmongering about ‘paid shills’ are not worth the attention of evidence-based researchers.

Fortunately for the Chicken Littles, this scene is not home to many evidence-based researchers. The vast majority of the viewers of ‘truther’ or ‘conspiracy’ videos on YouTube are straight-up conspiritards, who feel special when somebody tells them that the government is so scared of their ‘truth movement’ that they pay ‘shills’ to come along and ‘spread disinfo’. Never mind that the leading conspiritards who promote the ‘paid shills’ meme never talk about the Holohoax, and claim the ‘moon landings’ were real. If indeed ‘paid shills’ exist in this scene, one would think that part of their job description might involve ‘gatekeeping’, or encouraging their viewers not to stray beyond the go-nowhere ‘debunking’ of Baby Hoaxes.

JLB first challenged the conspiritards to present their evidence of ‘paid shills’ in December, 2015.

He then responded to the comments left in reply to that video with a three-part ‘Comment Review’ series.

Since then, JLB has continued to call out the ‘paid shills’ meme propagators, and on each occasion has demonstrated that those who promote the meme have little if any credible evidence to support their claims. Many veteran conspiratards find this very triggering, which is one reason why they tend to accuse JLB of being a ‘paid shill’ – as usual, without any evidence to support their claims.

For an insight into the mind of a ‘paid shills’ meme propagator, listen to the Jeffrey vs JLB debate of January 22, 2016. Note that Jeffrey was at one time the leading conspiritard on YouTube, and in the weeks leading up to – and following – the live debate, dedicated entire several-hour shows to accusing JLB of being a ‘paid shill’, even going so far as to claim that JLB was the ‘biggest shill on YouTube’. Listen for yourself to hear the best evidence Jeffrey could muster to support his allegations. Be sure to keep in mind the fact that from mid-2014 through to early-2015, Jeffrey was considered by many to be the leading ‘truther’ on YouTube. Once you have finished listening to the debate, let that sink in: this guy was their best.

For a complete, chronological playlist of JLB’s work in debunking the ‘paid shills’ meme, see this playlist.