Previously in this series

8 – My previous reference to the games
9 – No official numbering system for the cards?
10 – Charlottesville: the sync test case

Are these apparent ‘connections’ between certain cards and ‘real life’ events anything more than mere ‘coincidence’?

In Part V of this series we are going to focus on one particular connection to explore the concept of ‘coincidence’.

8 – My previous reference to the games

I have personally taken advantage of apparent ‘predictions’ made by the game in a shameless attempt to ‘go viral’. See below: 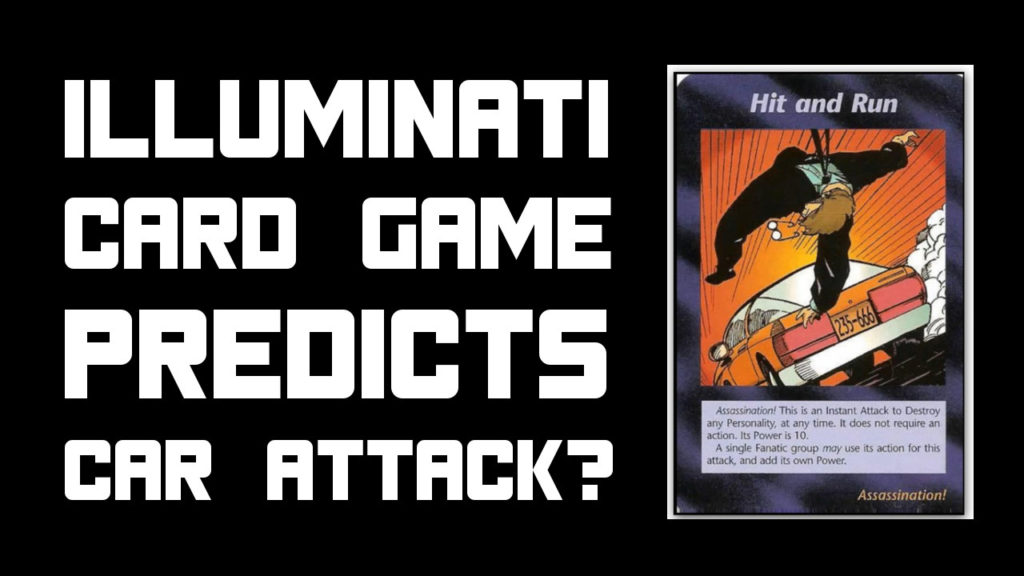 [Update: This video was posted on my original channel, which was subsequently deleted by youtube for ‘community guidelines strikes’. You can now see a backup of that video here.]

Note that when I created this video, I had not yet conducted a thorough investigation into the games for myself.

In putting together the piece you are now reading, it came to my attention that there is — apparently — no official numbering system for the cards of the games.

More on this in section #9.

Suffice for now to say that my video above was one of several I released publicly at the time of the Charlottesville event.

If I were to make the same video today, I would include an explicit ‘disclaimer’ that the numbering system is not official and may be the work of a single YouTube user.

Fortunately my video only demonstrates what happens when you google search ‘illuminati card 223’ and therefore remains both accurate and relevant, if only from the perspective of ‘sync’.

In short: I have shamelessly taken advantage of the ICG ‘predictions’ in the past, prior to properly studying the games for myself.

9 – No official numbering system for the cards?

There does not appear to be an official numbering system for the cards of either Illuminati (1982) or INWO (1994).

I could well be wrong about this and hope that I am. All of my research into the matter so far, however, leads me to the inference that any purported numbering system for the cards is unofficial.

An example of what appears now to me to be an unofficial numbering system is that in use by the YouTube channel ‘IlluminatiCardGame‘. This channel, which was created in November of 2012, hosts a short video dedicated to each card. No explanation, no analysis, just a several-second static image of each card, with the purported number of the card in the title of the video.

It was this channel whose numbering system formed the basis of my video concerning Charlottesville. The ‘Hit and Run’ card was listed as card #223.

I remain open-minded to the possibility that ‘IlluminatiCardGame’ based his/her/their numbering system on some official (or unofficial but widely-accepted) numbering system.

It seems more likely that ‘IlluminatiCardGame’ has simply made their own numbering system up entirely.

There are two reasons I come to this inference. The first is what is written on Steve Jackson Games own card list page:

Here it is – the official card list for Illuminati: New World Order. We didn’t publish this list when the game came out for several reasons . . . and the best one is that so many collectors seem to enjoy figuring it out for themselves! It was amazing to watch the messages fly back and forth on the Internet newsgroup rec.games.trading-cards.misc, as recipients of our free Rare cards started posting what they got, and other folks who just bought truckloads of cards started putting lists together.

This implies that putting one’s own list together is considered part of the fun of collecting this game (and/or CCG’s in general).

Also note that the SJG list is entirely alphabetical, with no reference to a numbered list whatsoever.

In other words, the people who released the game provide no official numbering system, and seem to have encouraged people to create their own lists.

The second reason I come to this inference is that the closest thing I have seen to a numbering system is that provided by ‘IllumintiCardGame’ on YouTube.

That is, the two cards which seem most relevant to the greatest ‘false flag’ made-for-TV-movie (hoax) of modern times are listed at #1 and #2.

This leads me to suspect that the numbering system they provide was put together after 9/11.

In short: There appears to be no official numbering system for the cards.

Let’s suppose that my inferences are correct: ‘IlluminatiCardGame’ made up his/her/their own numbering system and propagated it via videos uploaded to said channel beginning November, 2012.

This is still almost five years before the Charlottesville event.

On August 11 the ‘Unite the Right’ rally began, and on August 12 a car allegedly ploughed through a group of protesters.

The 223rd card, entitled ‘Hit and Run’, with an illustration which mirrors the iconic image from the ‘Unite the Right’ rally, which began on the 223rd day of the calendar year.

If it were Steve Jackson Games who originally released ‘Hit and Run’ as card #223, more than twenty years before the event, then the improbability of the ‘coincidence’ would be obvious.

What if the #223 were instead the work of a single YouTube channel, in 2012, just five years before the Charlottesville event?

We would still be dealing with quite a ‘coincidence’.

A more detailed exploration of ‘synchronicity’ is beyond the scope of this article. See An Introduction to Synchromysticism for a relevant overview.

8) I have shamelessly taken advantage of the ICG ‘predictions’ in the past, prior to properly studying the games for myself.

9) There appears to be no official numbering system for the cards.

The ‘Illuminati Card Game’ is supposed to be a mockery of conspiracy theories rather than an endorsement of them… right?

In Part VI of this series we are taking a look at some cards from ‘Illuminati: New World Order’ (INWO) which suggest that the game’s developers were certainly mocking somebody…

Click HERE to continue on to Part VI of the series.

The rest of the Illuminati Card Game Analysis series
+ over 300 hundred hours of exclusive video and podcast content
is available to Members of Johnlebon dot com.

Join now and receive instant access to all of the Member-only content,
PLUS an invite to the JLB Discord server.

Learn more about the benefits of Membership by clicking HERE.