Previously in this series

In Part II we looked at some well-known ‘coincidences’ involving the ‘Illuminati card game’ and events in ‘real life’:

In Part IV we are taking a look at some recent examples of life apparently imitating (game) art.

On October 1, 2017, an event took place in Las Vegas which received heavy coverage by major media outlets around the world.

We were told that a 64yo man named Stephen Paddock killed about 58 people and injured hundreds more, when he fired automatic weapons into the crowd of a music event, while sitting in the safety of a hotel room opposite the concert grounds.

What made the event particularly horrifying for audiences watching the news at home was the apparent preparation and planning put into the operation by the assailant. Mr Paddock had apparently hired a room at the Mandalay Bay Hotel with the express purpose of using that vantage point to rain bullets upon the helpless crowd.

The shooting took place when country music singer Jason Aldean was on stage performing his song ‘When She Says Baby.

Aldean’s set was the closing act of the three-day music festival known as the ‘Route 91 Harvest’.

Like most fashionable people today, Aldean happens to sport some hideous skin defacements.

Putting aside the apparent ‘black hole sun’ (and its resonance with both the 2017 Solar Eclipse and David Bowie) Aldean’s defacements are noteworthy here due to the cards.

The reason why Jason Aldean might like to have the Ace beside the Joker is obvious: JA are his initials.

What an amazing coincidence, then, that the following card was issued as part of the original ‘INWO’ release in 1994:

Las Vegas, J(oker) A(ce), Jason Aldean and his hideous tattoos. On stage when Paddock began his harvest of the Harvest paddock.

Note that several people had noted this coincidence within days of the event. Here is a short list of the earliest uploads I have found thus far:

Whether you put this one down to merely coincidence or something else, it certainly caught the attention of the ACT crowd at the time.

Pizzagate. For me personally this was the straw which broke the camel’s back.

There were a number of well-known content creators who I wanted to take seriously but no longer could, once they began regurgitating the talking points of ‘Pizzagate’.

It is fair to say that I have listened to far fewer ‘alternative’ podcasts since late last year as a result.

How can I take seriously anybody who genuinely believes that Julian Assange or ‘Wikileaks’ are truly opposed to the people who run the show?

“I’m constantly annoyed that people are distracted by false conspiracies such as 9/11, when all around we provide evidence of real conspiracies, for war or mass financial fraud.”

9/11 a ‘false conspiracy theory’? Did Assange really say that? If so, was he taking the piss?

A detailed exploration of ‘Pizzagate’ is beyond the scope of this piece.

Those unfamiliar with the story can get a good overview from this Snopes article.

Yes, even if you disagree with Snopes on this particular matter (or have an aversion to them in general), the overview/chronology provided in that piece can still be useful: it explains how the story unfolded, with links and quotes, beginning with a post at r/the_donald and progressing from there.

In the interests of ‘balance’, here is a pro-Pizzagate (i.e. ‘pizzagate is real’) article via Steemit which provides a similar chronology as the Snopes and NYT pieces cited above:

[T]he 15 day long internet phenomena that occurred on Reddit in November 2016 known as /r/Pizzagate originated out of John Podesta’s emails released by WikiLeaks. The /r/Pizzagate subreddit spawned the Pizzagate/Pedogate movement that has now gone viral all over the world. This movement has been wildly misrepresented by the Legacy Media under the false narrative that it is a “Fake News Alt-Right conspiracy theory about Hillary Clinton running a pedophile ring out of a pizza shop”. The Pizzagate/Pedogate movement is not, nor has it ever been a hoax of any kind. If you heard this then you have been reading or watching Fake News.

The undertaking of this unprecedented massive crowd sourced investigation was birthed by the collaborative forces of millions of internet users all over the world through the use of the popular websites 4chan, Reddit, Voat, 8chan, and Twitter.  The Pizzagate/Pedogate movement and investigation has ALWAYS been a non-partisan investigation into the existence of an international human/child sex trafficking operation that is perpetuated by the elites and covered up by various government agencies throughout the world.

The pro-Pizzagate article above confirms the key points of the matter as laid out by the Snopes and NYT pieces:

They actually believe that there are ‘millions‘ of pizzagate ‘researchers’ out there (i.e. part of their ‘movement’)

We’ll revisit these key points in a moment.

ii) My personal take on ‘pizzagate’

For now, here is my single biggest problem with ‘Pizzagate’: there is no actual evidence of any wrongdoing by any of the alleged perpetrators.

There, I said it.

I know this will trigger a lot of people and many will not continue with this series as a result. That is okay.

iii) Why are stories like ‘pizzagate’ so popular in the ACT realm?

Some will come back and say to me, ‘there is nothing comforting about knowing that kids are being abused!’

My reply to them is simple: then why do you keep reading posts/blogs/articles and watching videos which focus on the topic of child abuse?

Having been through this process with pizzagate believers a number of times, I know what the response will then be:

‘Because we are learning and spreading awareness of this issue!’

And then I reply, ‘and then what?’

Let’s pretend that ‘pizzagate is real’ and that rehashing the same ‘evidence’ is somehow ‘spreading awareness’. Then what?

Don’t ask me why, but some people actually enjoy, on a deep level, reading and listening to claims and allegations about what the bad people are doing to children.

This is proven by their behaviour: they keep reading and listening to claims about what the bad people are doing to children, over and over and over again.

And they get triggered when people like myself point out that it achieves literally nothing: they are willingly subjecting themselves to dark stories, of children being sexually abused, for no observable benefit or change in the objective world.

What effect is repeated exposure to stories about child abuse having on the psyches of these would-be ‘truthers’? I am reticent to imagine.

All I know is that I have been personally and publicly accused of acting as a ‘pedo enabler’ for daring to doubt the Pizzagate story.

For daring to ask for actual evidence to support the claims being made. For daring to want more than ‘leaked’ emails with alleged ‘code words’.

iv) Why are people so attracted to stories of child abuse and other sexual scandals?

I have my theories. This is neither the time nor the place to go into too much detail.

What I will say is this: the proles are encouraged to vent their angers and frustrations at fictional boogeymen on a regular basis.

Some argue that this is healthy for society: the ‘two minutes of hate’ act as a pressure valve, allowing the humans to ‘let off some steam’ in a relatively harmless way.

In cases like Pizzagate, or the recent Kevin Spacey ‘scandal’, the lemmings at home are able to get angry at a screen which will never fight back.

Nobody is going to get into any trouble, nothing actually has to happen, but the masses are given their outlet for channeling latent hostility.

Supposedly, the emails contain code words. For instance, it is alleged that ‘cheese pizza’ = ‘child pornography’.

If the emails themselves weren’t flimsy enough, they come to us from a key member of the puppet class, via the most obviously-controlled opposition you are ever likely to see.

In other words, we have:

Circumstantial evidence (‘this word equals this other word/thing’)

‘Leaked’ by Wikileaks (9/11 was totally done by Osama, just as portrayed on TV guyz)

From the emails of a major party figure (i.e. a high-level puppet)

And yet the story dominated the ‘alternative media’ scene for months and continues to be spoken about seriously to this day.

I remember it well. When this story started taking off it was covered heavily by the two ‘alternative’ podcasts I still listened to at the time:

I had to stop listening to both. It was painful to hear men I used to respect as ‘researchers’ getting sucked in so easily by this story.

As did the largest ‘independent’ outlet, Henrik Palmgren’s Red Ice.

Then there are the online forums like r/conspiracy and /pol/ which were flooded with posts and threads about Pizzagate.

If you didn’t know better, you might wonder if TPWRTS were more than happy for the ACT scene to be so distracted by this go-nowhere story…

[Update 26-Aug-2022: Entire section had to be deleted because all three links have now gone dead, wtf]

viii) Pizza for the Secret Meeting

In 1995 an expansion pack for INWO was released, entitled ‘Assassins’.

One of the ‘common’ cards included in this expansion is named ‘Pizza for the Secret Meeting’.

Consider the text of this card:

Play this card at any time. Pick one Secret group to lose its Secret status for the rest of the current turn.

Secret meeting. Pizza. Double cheese. Play this card and the secret group loses its secret status for a while.

A card released more than twenty years before ‘pizzagate’ swept the ACT scene by storm.

Things that make you go ‘hmmm’…

The ‘alt right’ are getting together for a little protest, which their leaders have promoted under the banner of ‘Unite the Right’.

‘Antifa’ have decided to rally the troops for a ‘counter protest’.

What could possibly go wrong? 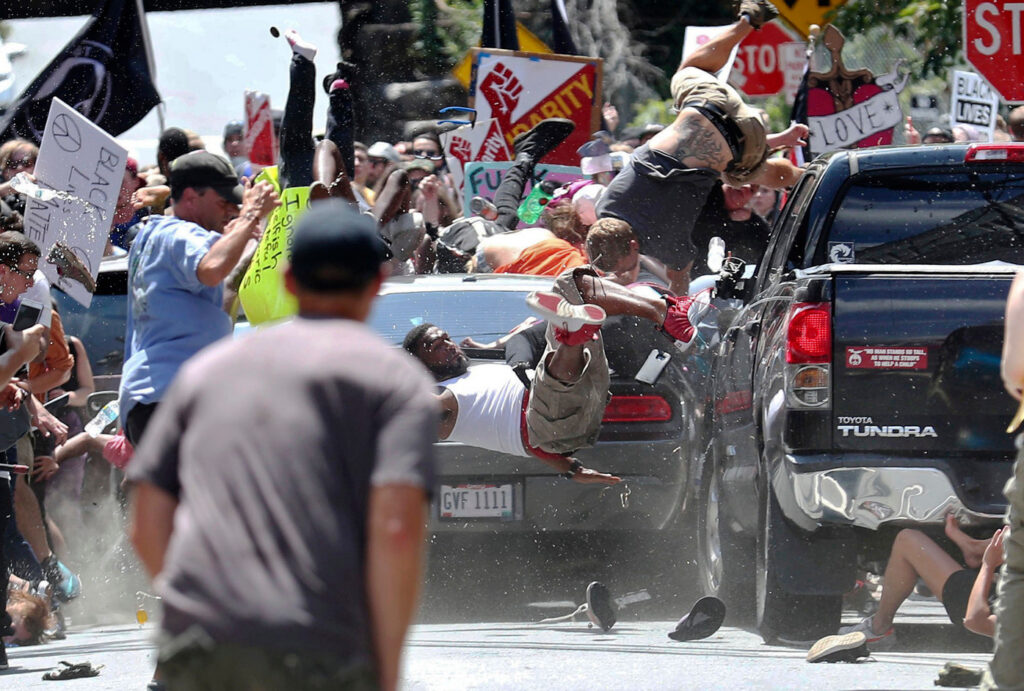 One of the original INWO cards is worth considering here.

There is a lot more to the Charlottesville event…

E) Las Vegas ‘Route 91’ event: the ‘Las Vegas’ card appears to bear some resemblance to the tattoo of Jason Aldean, who played a key role in the shooting narrative.

F) Pizzagate story: the ‘Pizza for the Secret Meeting’ card appears to resonate with the ongoing ‘pizzagate’ story.

G) Charllottesville ‘Car Plough’ event: The ‘Hit and Run’ card features an image uncannily similar to one of the iconic photos from the ‘Unite the Right’ event.

Are these apparent ‘connections’ between certain cards and ‘real life’ events anything more than mere ‘coincidence’?

In Part V of this series we are going to focus on one particular connection to explore the concept of ‘coincidence’.