Previously in this series:

Part I – Introduction and Overview

Note: ‘coincidence’ vs ‘conspiracy’ vs ‘sync’

Is it possible that whoever made these cards had some kind of ‘foreknowledge’ about major events which would occur years or decades later?

In Part II of the series we are taking a look at some well-known examples of game cards which seem to ‘predict’ major media events.

Note: ‘coincidence’ vs ‘conspiracy’ vs ‘sync’

At this stage of the series I will simply refer to the apparent/alleged connections between the cards and ‘real life’ as coincidences.

These items are presented here for your consideration, with no explicit or implicit claim on the author’s part that the apparent connections are anything more than ‘coincidences’.

A deeper exploration of ‘coincidence’, ‘synchronicity’, and the concept of ‘predictive programming’ will follow later in the series (see Part V).

Nobody needs any reminding about what happened in New York on the morning of September 11, 2001.

Boogeyman Laden (as he preferred to be called) was a shrewd tactician, operating from a bunker which had been built within a cave.

Fortunately for freedom-lovers all over the world, Boogeyman Laden was eventually killed and buried at sea by Glorious Leader Barack Obama.

Praise be his holy blackness.

Now how did Boogeyman Laden bring down the Twin Towers on that fateful day?

So clever was Boogeyman Laden’s idea that some wonder if his cave had been fitted out with the latest in television technology.

The episode of The Lone Gunmen cited above aired in March of 2001, about nine months before the events of 9/11.

Seven years earlier than that, however, came the release of ‘Illuminati: New World Order’ by Steve Jackson Games.

Among the set of cards which could be collected and traded was one entitled ‘Terrorist Nuke’.

There does exist a small group of people who seem to believe that the Twin Towers were brought down with ‘mini nukes’.

I disagree with them.

A deeper exploration of what really happened on 9/11 is beyond the scope of this series; suffice to say that my own personal opinions on the various ‘conspiracy theories’ concerning 9/11 can be gleaned from this 11-minute video and this 14-minute video.

What we can all agree on is that the ‘Terrorist Nuke’ card does bear some resemblance to images which were broadcast around the world on 11-Sep-2001:

Two buildings which appear to have been designed/built identically (i.e. like twins)
Both buildings appear to rise above the rest of the skyline (like towers)
An explosion occurring somewhere towards the middle of the structure(s)
The word ‘terrorist’ in the title of the card

The Daily Star provides a useful comparison of a real image from 9/11 and the image on the card: 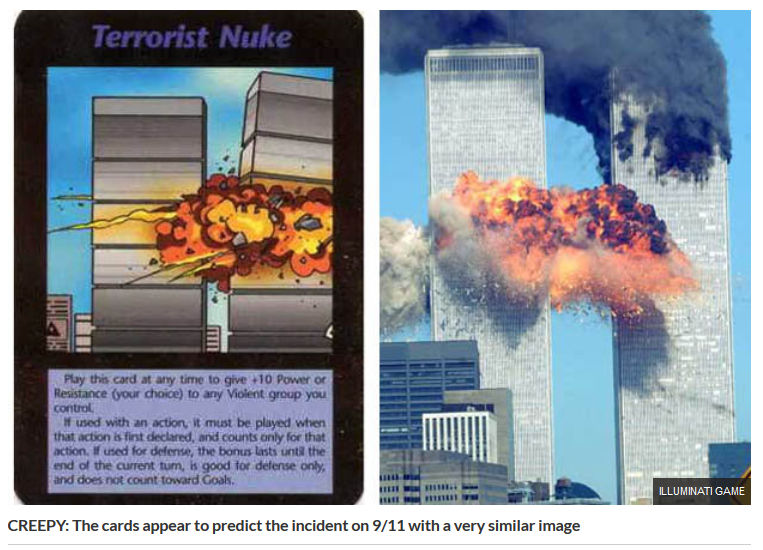 You’ll notice the planes buzzing around the building in the background, apparently there to bother King Kong.

Of course, Boogeyman Laden was not a man to do things by half. The Twin towers were only one of the targets that day.

Also hit by a plane was the heart of American defence intelligence, the Pentagon.

More than six years before the events of 9/11, a card game was released which included as part of the ~400 original cards:

What is to be made of all of this? That will be up to you.

“Princess Diana is dead.” I remember hearing those words on the radio before school one morning, back in Grade 4.

It was 1997. The biggest problem in my life at the time was trying to decide how much sugar to put on my weetbix.

This ungodly practise still takes place in kitchens all over the western world, judging by how fat and stupid most of the kids today seem to be.

But in 1997 there was one lady who would be taking a permanent break from the sweet misery of saccharin.

Weetbix or otherwise, her sugar-hitting days were over.

You see, one fateful night in a tunnel not far from the Eiffel Tower, tragedy struck.

The paparazzi had claimed another victim. Diana’s driver tried to escape from their whirring cameras and flashes by hitting the gas pedal.

Instead, he somehow managed to drive straight into a wall. At high speed.

An innocent woman had been cut down in her prime.

A princess, no less.

Or was she still a princess? How do the laws work when a princess gets divorced from a prince?

Never mind: a beautiful woman (who may or may not have still been a princess) suffered a terrible accident one night in Paris.

She went into that tunnel the darling and envy of women all over the world, and came back out of the tunnel on the inside of a bag.

A body bag. A bag for dead bodies.

A bag for dead bodies which are never coming back to life. Because it is over. Forever.

What might not be clear from the image above is the text of the Princess Di card, which reads as thus:

All your other Liberal groups get +1 Power.
Princess Di, and her puppets, are immune to attack by your rivals’ Peaceful or Liberal groups… except for Media.

That is the card’s emphasis, not mine; the card italicises the word ‘Media’.

In other words, the text can be read as:

“Princess Di, and her puppets, are immune to attack… [insert evil laughter] except for Media.”

I suppose one way we can determine if this card is in any way ‘predictive’ is to figure out what it is that the ‘paparazzi’ actually do.

Is it true that the ‘paparazzi’ have something to do with… the media?

So popular is 420 that one town supposedly had to change its road markers to deter theft of the ‘420’ sign.

In 2010, about 40 miles off the coast of Louisiana, in the gulf of Mexico, there was smoke of a different kind rising into the air.

The result of the Deepwater Horizon disaster, we are told, was 11 people dead and 17 more injured.

And then there was the toll on the the natural habitat and wildlife.

An innocent bird covered in oil. Another example of the absurdity and depravity of ‘modern art’, or something less sinister?

Sadly, we are told, countless animals along the coast suffered from the effects of the Deepwater Horizon disaster and the ‘BP Oil Spill’ in which it resulted. The card is from the 1995 ‘Assassins’ expansion pack for INWO.

Of course, oil spills will happen, and this was true in 1995 as it is today.

And, yes, I have cherry-picked a photo of a bird covered in oil to match the image on the card, for dramatic effect.

This part is focused on well-known ‘coincidences’ between the cards and ‘real’ events, and the Oil Spill card is one of the more popular ones.

Whether or not you find any or all of these coincidences worthy of a closer look will be entirely up to you.

You know the feeling. You’ve been jogging for several hours straight and are only a few yards away from the finish-line of a major marathon…

Okay. Most of us don’t quite know that feeling. Fair enough.

What we can do is imagine what it is like to jog 26 miles and then be blown over by a pressure cooker bomb.

And imagination is what we’ll need, because the footage from the Boston Bombings leaves a little to be desired…

The explosions, which killed three and injured hundreds more, were not even powerful enough to knock bystanders off their feet, let alone the joggers passing near.

In fact the explosions were not even strong enough to shatter windows situated a few yards from the bombs.

If you zoom in on the above image, you’ll even see what looks like a plastic drink cup which was apparently sturdy enough to survive the blast upright.

You might wonder, ‘well how do we know those cups weren’t blown over and then placed back upright by cleaners/investigators after the explosion?’

Good question. Of course, we don’t know if the cups survived the blast upright, but…

…it seems unlikely that somebody would fill the cup(s) after the fact and then place them on the table.

Then again, who knows? The cups are, at best, circumstantial evidence regarding the strength of the pressure cooker bombs.

…despite missing both legs, due to them having been blown off in the blast.

The blast which may or may not have been powerful enough to knock over a drinking cup.

And was certainly not powerful enough to break the glass windows just a few yards away.

And was also not powerful enough to knock over the Jogger in Green.

Is that Green Jogger the same woman seen in the images below?

The poor resolution of the video makes it difficult to say for certain, but it seems likely that the ‘green jogger’ seen in the immediate vicinity of the blast is the same lady captured in the two still photographs cited above.

Either way, a certain resemblance between that lady and the following card is noteworthy:

Nobody is seriously suggesting that the lady in green had something to do with the explosion(s) at the Boston Bombings. Right?

i) RevoltBeginsNow: Was The Green Runner The Real Boston Bomber? (2-May-2013)

Be sure to also check out the rebuttal video:

Note that RevoltBeginsNow left a detailed reply to the rebuttal video:

Is the ‘Jogger’ card -> Boston Bombing connection a reach? Have certain ‘truthers’ gone too far with this one?

That will be for you to decide.

The issue of the card numbering system (or apparent lack thereof) is explored in depth in Part V of this series.

Note: This Part refers to apparent connections between cards and events as ‘coincidences’. Part V takes a closer look at coincidence/conspiracy/sync.

D) Boston Bombings: ‘Jogger’ card has been linked by some to the mysterious ‘green jogger’ at the marathon finish line.

Is there a reason why so few people take these ‘coincidences’ seriously? Are the ‘truthers’ actually discrediting the work of legitimate researchers?

In Part III of this series we are taking a look at the existing coverage and analysis of the ‘Illuminati card game’.

Production notes: Updated 31-Oct-2018 to fix two images (Boston windows and Oil Spill bird) whose image-links had been broken. Thanks to Hando for bringing this to my attention.