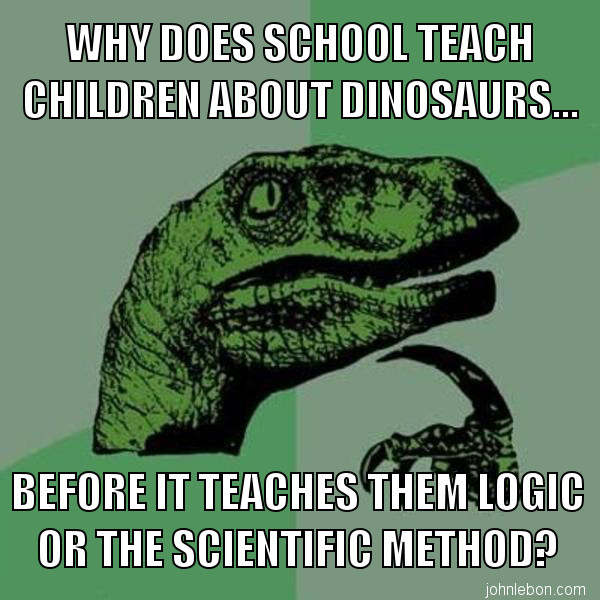 We all know for a fact that dinosaurs roamed the earth millions of years ago. None of us has ever seen a live dinosaur, and none of us ever will, but we all know for certain that these often-gigantic creatures once dominated the landscapes of the prehistoric world.

How do we know this? We all saw it in the movies and/or learned about it at school, dummy. What more evidence could one possibly need?

There are of course many examples of fossilised dinosaur remains, which the good doctors tell us are millions of years old. We trust their radiometric dating techniques, even though they are obviously impossible to calibrate.

We are told that these dating techniques involve measuring the decay of atoms, and since we know for sure that atoms are real, the rest of the story seems to make enough sense.

These are scientists, after all, and if we can’t trust people who memorise textbooks and have letters after their names, who can we trust?

For people who are still able to consider opposing viewpoints without getting emotionally triggered, the official story of dinosaurs begs serious investigation and analysis. When were dinosaurs first discovered? How many different species are claimed to have existed, and who gets to decide when enough of a fossil has been found to constitute the discovery of a new species?

How many dinosaur experts are there, and what does one need to do to become one? Just what is radiometric dating, and what confidence can we have in claims made by this scientific process?

These questions and more are enough to scare away the typical normie, but ought to be of significant interest to any mature human still in possession of a functioning brain.

In April 2017, JLB and his old buddy Lindsay ‘the Silverfox‘ Johnson set out to investigate the scientific claims surrounding the amazing dinosaurs finds of Australia.

The pair completed a 3,000+ km roadtrip to Winton, Queensland, regarded as the home of Australian dinosaur discovery.

Footage taken during this trip will be used as part of a feature-length documentary which is currently in pre-production (under the working title of Dinoskeptics) and expected to be released early 2022.

Several hours of content from the trip have already been published on this site with new material being added on a regular basis.

JLB has been interested in the Dinofraud since early 2015 and has released several videos pertaining to it. Below are some of them.

Check out the Are Dinosaurs Fake page on Dinoskeptic.com